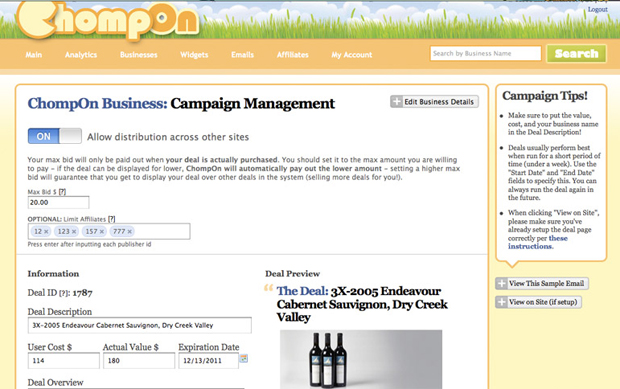 White label daily deals platform and TC Disrupt finalist Chompon today launches what it is calling an “Adsense platform for daily deals.” Rolling out today is a new Chompon affiliate functionality that makes it easy for publishers to drop in a deals widget where they’d normally show an ad unit, enabling them to sell targeted deals instead of ads.

Niche websites can now get the monetization of ecommerce sites like Groupon applied to the scale of a display ad with ChompOn’s embeds. The ChompOn platform also allows deal providers to bid on getting their ads sold and automatically tracks sales and other analytics for both merchants and publishers. Deals like this one can now be distributed across any affiliate site whether it’s part of the Chompon network or not.

Thus far Chompon is working with 50 partners including Blackbook Magazine, JDeal and as of today the wine branch of Beyondtherack, a flash deals site and their largest partner thus far. While CEO Samuel Yam wouldn’t get into specifics, the service currently has a few hundred thousand dollars in monthly gross revenue and will be announcing additional partnerships in the coming months.