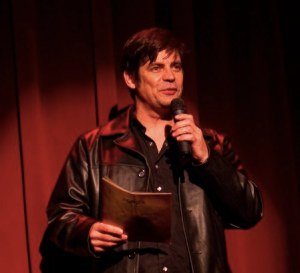 It is 25 degrees here in NY and I feel like a wuss. We California people aren’t cut out for the weather out here. I’ve got thermal underwear (top & bottom), another shirt on top, pants, sweater, jacket, long coat, gloves and a hat on. So, the next time I bitch about it being 50 degrees and windy in San Francisco, I need to remind myself to STFU. These people endure some serious cold. Look at that photo to the left of Nick Gillespie. I think that’s what he wears when it is this cold.

So, what would draw me out of San Francisco weather to NY this time of year? The celebration of John Stagliano‘s acquittal presented by the Reason Foundation and hosted by this week’s TCTV guest Nick Gillespie. John Stagliano’s federal obscenity charges, his acquittal and this celebration warrants an entirely different post, so I’m not going to get into it too much here. The event was held at the famous NY’s sexy and edgy “The Box” and the attendees were incredible. We all came out to celebrate something we hold near and dear to our hearts: free speech.

Here’s a quote from a piece he wrote with Matt Welch that Gillespie read to us last night:

Our right to free speech is built upon the sacrifices of people who risked a hell of a lot — their livelihoods, their social standing, their freedom — to make it easier to speak freely. From colonial printer John Peter Zenger, who helped establish freedom of the press against the British crown, to Allen Ginsberg, whose generation-defining poem Howl endured countless censorship attempts, to Molly Norris, the cartoonist who has been driven into hiding after suggesting “Everybody Draw Mohammed Day” as a response to death threats leveled against the creators of South Park for poking fun at religion, free speech is always endangered, always under siege.

Nick was the voice of Alyssa Milano for a few years. Even though he was a ghost writer for her, he’s yet to meet her, so if you know someone who knows someone, we should create a meeting between the two. I think it needs to happen.

Nick Gillespie is the Editor-in-Chief of Reason.com/tv which he co-created with Drew Carey. Reason.tv is the online video component of Reason magazine and reason.com. Gillespie dedicates much of his life to our liberty, and regardless of what political side you are on, he has some awesome advice on how to use your medium to get your message out. So, this is a special interview for all of you aspiring writers out there.

Listen to Nick’s views on net neutrality, being connected, who to write for and more here: