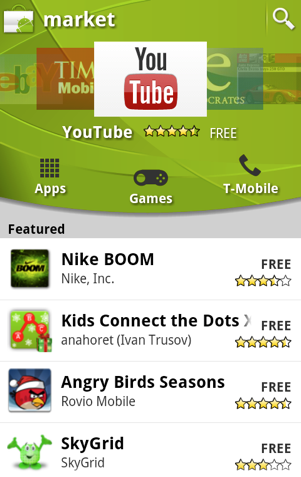 I’ve been an Android fan for a while now, but I can’t remember the last time I had anything good to say about its integrated application marketplace, Android Market. Compared to the iPhone’s App Store, Market’s experience has always looked less visually compelling, and in general it’s been harder (and less fun) to navigate.  Today, the Google team has announced that Android Market will be getting an upgrade over the next two weeks. And good news: this update will be going to all Android users who are on version 1.6 or higher, which means it will go out to the vast majority of devices.

I haven’t gotten access to the application yet, but judging by the screenshots the Market has gotten a fresh coat of paint, and looks much more modern. Promoted applications — which until now have been tiles at the top of the screen that would change every few seconds — will now be featured in a swipable view that looks a lot like Apple’s CoverFlow.

Data about each application will now be consolidated into a single window pane. The Market will also include a content rating system (this is not shown in the screenshots, so you can’t really see what this looks like yet). And app targeting has been improved while size restrictions are loosened:

To make it easier for developers to distribute and manage their products, we will introduce support for device targeting based on screen sizes and densities, as well as on GL texture compression formats. We are also increasing the maximum size for .apk files on Market to 50MB, to better support richer games.

One major change that I’m sure developers will applaud involves Android’s refund window. Historically Android has offered a 24 hour return window for users who purchased an application and decided they didn’t want it; this time limit has now been cut down to 15 minutes. Google’s explanation is that this is because it will “help developers manage their businesses more effectively”, and that “most users who request a refund do so within minutes of purchase” anyway. It’s probably because developers feel frustrated when users buy a game or utility, use it for a full day, and then get a full refund (and there may be some accounting issues, too).

And, from the I-can’t-believe-it-didn’t-have-this-already department, Android Market now has separate categories for Widgets and Live Wallpaper applications. And it looks like the Android typeface (which always made things look a little less polished for some reason) has apparently been abandoned in some menus.

Of course, this new release is still missing one key feature: a web version of Android Market. This was previewed during Google I/O way back in May, promising to let users browse through Android applications from their web browsers, and then wirelessly ‘push’ the applications they purchased to their phones with no tethering needed.

My hunch is that this functionality (or parts of it) is latent in this new version of Android Market, and that Google will activate it once the web component of this is done. Here’s what the team had to say about upcoming releases:

However, we’re not done yet. We plan to continue to rapidly enhance Android Market for both users and developers and make it the best content distribution service for the Android ecosystem.

Please stay tuned as we continue to deliver new capabilities in the coming weeks and months. 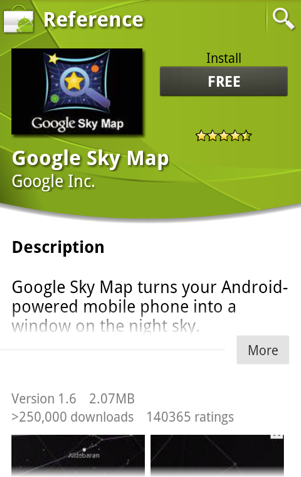