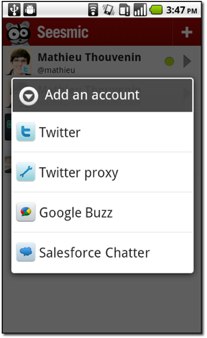 Seesmic, the realtime social web aggregator, is announcing a new version of its popular Android app today that includes a UI makeover, Salesforce Chatter integration, and other improved functionality.

Salesforce Chatter, the company’s social networking application for the enterprise, can now be integrated into Seesmic’s Android app, allowing users to read their Chatter feeds, comment, view groups, contacts, profiles and post updates from the app. You can also cross-post updates to and from Twitter back into a Chatter account.

The UI of the app now includes a “common actions” area at the top right of every screen, including the composer and refresh actions. Seesmic has also made Tweeting easier by adding an autocomplete of friends usernames feature on Twitter. And when you attach photos and videos to messages, you can tap an “attachment count” button to see all the photos and videos you attached, as well as their size.

Another new Twitter feature in the new version of the app is the ability to see full, threaded conversations between yourself and the person you’re replying to. And the startup has added new language functionality to the Android app, with versions in Spanish, Japanese, German, French, Korean, and Polish.

One of the bonuses to using an app like Seesmic is the ability to aggregate your streams from a number of other social web services, like Facebook, YouTube, Foursquare, LinkedIn and others. Seesmic had previously added Chatter to its other applications, but the Android app now has a link to the enterprise.