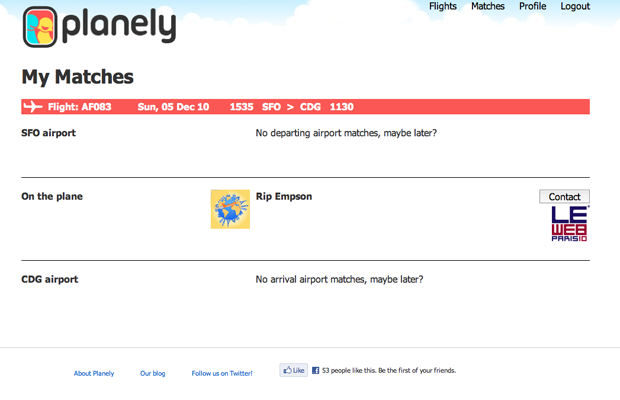 Flying out to attend TCDisrupt in New York, a bunch of us were delighted to discover we were all on the same plane together, the infamous #VX22. Let’s face it, being on the same flight with someone you know is pretty fun most of the time, as a plane flight is a pretty unique shared experience and oftentimes results in a lasting bond. Don’t believe me? Shortly after sharing #VX22 with TechCrunch staff, I too started working for TechCrunch.

Planely co-founder Nick Martin is trying to tap into precisely this effect with his Copenhagen-based startup Planely. Travellers can connect with Facebook, enter their flights and see what other users will be at the same departure airport, on the same flight and/or at the same arrival airport.

This is great especially in the use case of massive early adopter attracting conferences like LeWeb, which is the first conference to partner up with Planely. Conference attendees can share rides, information or simply get better acquainted while travelling.

Planely users can also message each other beforehand, and start building a relationship before they even leave for the airport. So if anyone else is leaving for Paris on Sunday, you know where to find me.