The Google Earth Engine brings together the world’s satellite imagery—trillions of scientific measurements dating back more than 25 years—and makes it available online with tools for scientists, independent researchers, and nations to mine [a] massive warehouse of data to detect changes, map trends and quantify differences to the earth’s surface… 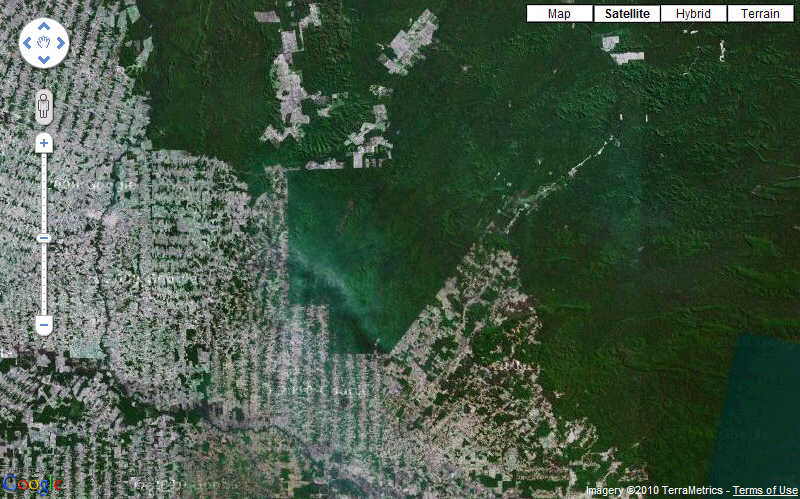 Some early Google Earth Engine partners mapped surface water in the Congo and created a granular map of Mexico’s forest cover and water. One scientist, Carlos Souza Jr. of IMAZON, the Amazon Institute of People and the Environment, a non-profit research entity, took original satellite imagery of Surui indigenous territory in the southern Brazilian Amazon (image, above) then analyzed it using Google Earth Engine to reveal forest damage in the region (image, below). 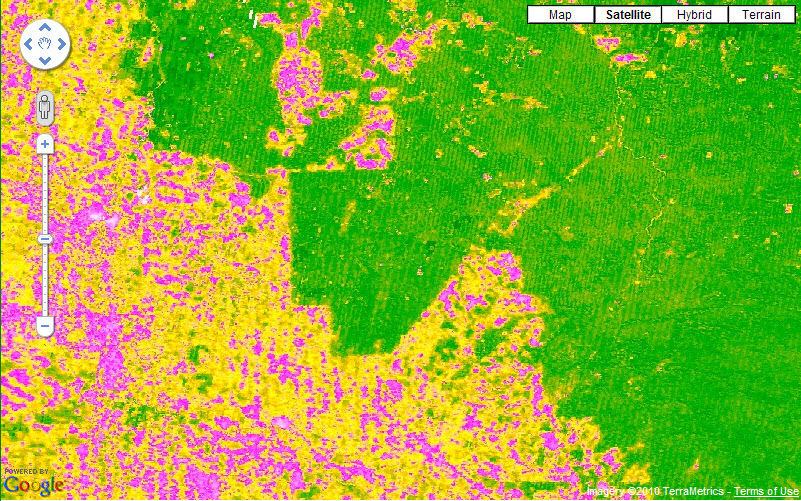 Google envisions their Earth Engine and API advancing a number of monitoring, reporting and verification efforts. Results could be: maps that show where ecosystem services exist and gaps where they are needed, reports that find and illustrate changes in the Earth’s surface over time, and visualization of land use trends as agricultural activity shifts in response to water shortages, rising sea levels, and other problems that result from climate change.

Countries are rallying to reduce emissions from deforestation and forest degradation in developing nations at COP 16 this year. Healthy trees and forests abate climate change, keep the air cleaner and food supplies stronger, according to the United States Forest Service.

Developing nations are (and have already been) most negatively effected by a rise in global temperatures as Kofi Annan, the former U.N. chief and Nobel Prize winner attests here. Keeping forests healthy in these regions could have a near-term beneficial impact.

In light of the COP 16 initiative, Google plans to donate “10 million CPU-hours a year over the next 2 years on the Google Earth Engine platform, to strengthen the capacity of developing world nations to track the state of their forests,” the company announced today.