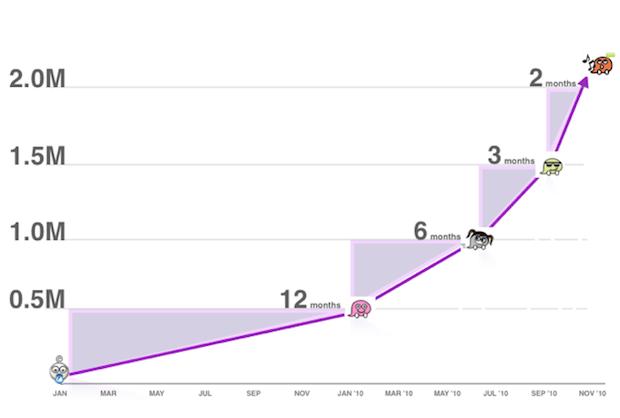 It took Waze a full year to get 500,000 users. It then took another six months to hit a million. Three months after that, they hit 1.5 million. And in just the last two months, they’ve already surpassed 2 million users. In fact, they’re past 2.2 million, actually.

Yes, the Israel-based social mapping company has become a hit. And for good reason too — it’s a good idea and a fun one too. Thanks to cellphones with GPS and WiFi triangulation capabilities, they get users to build out their maps for them simply by driving around. And if there are issues on the road, such as major traffic jams, all of that information comes in through the apps and can be sent to other drivers.

So why use it? Well, first of all you get free GPS navigation. But there’s also the gaming element. It used to be that if they didn’t have an area mapped, there would be Pac Man-like pelts so entice you to go there and earn points for driving around, mapping the area for Waze. But back in August, they allowed you to make more of a personal game out of the app. You can now cruise around your city picking up treats for sending in reports and other things.

But the best part about the app may be the actual model. It used to be that you had to pay satellite or mapping companies millions of dollars for road data and information. That’s a big reason why GPS units have been so expensive. But Waze figured out a way to build their own maps and bypass the system.

It’s a model that has been somewhat challenged by Google, which offers free turn-by-turn navigation through Android, but so far they haven’t done anything with other devices. Waze, meanwhile, is spreading quickly. The company says users are spending about 300 minutes a month using the service.