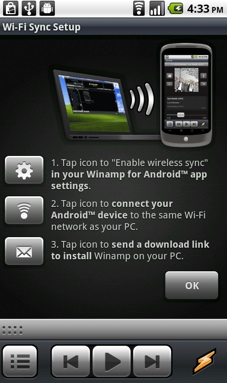 Today Winamp for Android is coming out of beta, a month after its initial launch and more than 500,000 downloads later. The public Android release lets you manage your music downloads on your Android and will offer a couple new features, including wireless syncing over WiFi with Winamp on your desktop computer and the addition of Shoutcast radio stations. (Both Winamp and Shoutcast are owned by AOL, as is TechCrunch). The wireless syncing requires a new desktop version for Windows computers, which is also available today.

Winamp is a popular music management software for Windows, with 60 million users predominantly overseas. In fact, only about 5 percent of its users are in the U.S. But AOL is making a big push with Android, hoping to attract a lot of new U.S. mobile users and become the iTunes for Android devices. AOL has no plans right now to release Winamp for iPhone where it is pretty much impossible to compete with iTunes. “There is a lot of inertia around the iPhone. We have to nail this first,” says Jeff Bronikowski, the new VP of AOL Music who was hired away from Yahoo Music earlier this month.

Instead, AOL is going to ride the Android wave. “Now with the Android OS beating out iOS, it is a foregone conclusion that it will beat out iOS over time,” argues Kerry Trainor, senior vice president of AOL Entertainment. Winamp is going to be positioned as the best music management app for Android. Of course, there are other contenders for that title, including doubleTwist and Songbird 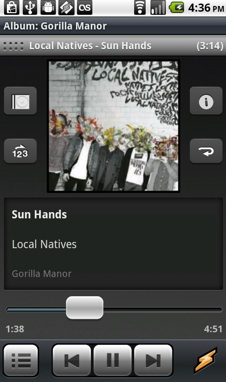 Just like with iTunes, Winamp lets you mange and play your digital music collection. You can even do a one-click import of all your non-DRMed music from iTunes. You can create playlists, search by song, artist, or album, and listen to Shoutcast Radio. Click on an album cover as you are listening and you get discography information, news, and meusic reviews from AOL Music. And while Android and Google will support over-the-air syncing for music, Winamp’s Wifi syncing solves the problem of getting music from your desktop to your phone effortlessly.

People spend a lot of time with their own music collections. The average Winamp user spends 80 minutes a day listening to music through the desktop app. Extending listening opportunities to mobile phones should extend that average time.

Could Winamp become a Trojan Horse for a future music streaming service from AOL beyond Shoutcast radio? Probably not. Bronikowski says AOL Music is “not planning on launching our own subscription service.” Winamp is currently a profitable business, he notes, and he wants to keep it that way. But if it does take hold on Android devices, it could become a strong distribution partner for other subscription music services.