I’ve come across quite a few Santa Claus imposters in my time. Most of them were easy to spot: there’s the funky smell that has more in common with aftershave than cookies; the squeaky voice that would make any reindeer snicker; or, most often, the fake beard that looks like a giant cotton ball and droops in all the wrong places.

But last Tuesday, I met the real Santa. Big as a house. Able to list off a dozen varieties of cookies in one breath. Six foot, eleventy-three inches tall. Smelled like candy canes. And a voice that was somehow both jolly and booming at the same time. So, of course, we grabbed a camera and asked him what makes St. Nick tick. Be sure to stay tuned until he discusses the tension between real and ‘designer’-bearded Santas.

The visit was made possible by the goofy folks at Microsoft, who have partnered with Southwest Airlines to place Santa Clauses in over 20 airports across the US this holiday seasons. Kids will be invited to snap a photo with him, which they can then upload using Microsoft’s photo and email services. Pretty neat.

You social media fiends should be happy too: this awesome Santa, who goes by ‘Walter’ during the off-season, maintains a presence on both Twitter and Facebook. You can book him for parties at Santa4events.com, and he’s also part of the Santas of Northern California Club. Watch the video for more on these clubs — there’s apparently quite a large community.

Oh, and in case you’re wondering, Santa said that while I’ve had a few blips on the ‘naughty’ meter this year, my needle is currently pointing toward ‘nice’. Let’s hope I can keep it together for another month.

And Happy Holidays from the TechCrunch Team! 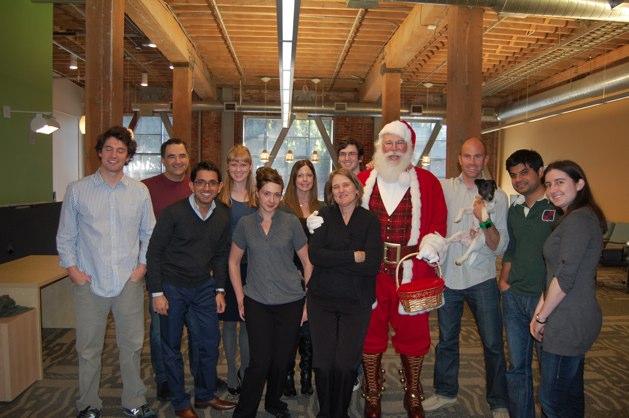