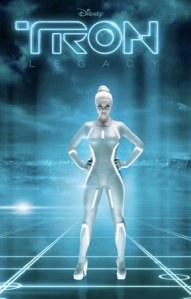 Ok TRON fans, have I got a treat for you!

I just returned from a two day TRON press event with some awesome interviews from the creators, cast and crew of TRON: Legacy and the original TRON. I asked many of the questions I solicited from TechCrunch commenters  and everyone seemed to love them — especially Jeff Bridges. I mean, maybe they say this to everyone, but his handlers said they had not seen him that animated until our question came along.

Bridges was also pretty excited to talk about the tech involved in the making of TRON: Legacy. He took on the project of making the movie with enthusiasm when he realized he could do much of the acting without cameras by using motion capture.  Keep a look out for his interview in part 3&4 along with the super sexy and awesome Olivia Wilde!

Part one (video below) includes interviews with Steven Lisberger, the original writer and director of TRON and co-producer of TRON: Legacy. I asked Steven this question from TechCrunch reader “hmbguy”:

“[I] watched the original while in high school. It was a BIG reason I went into computing, the other being Tracy Kidder’s “Soul of a new machine”. I’m curious to know if the original cast thought their movie would have such a huge impact. From what I’ve heard that’s where we get cron on Unix as well.”

The second half of part one includes interviews with Bruce Boxleitner, who is well known for his roles as Alan Bradley and title role Tron in the original TRON movie as well as Bruce Sheridan in Babylon 5; and James Frain who plays Thomas Cromwell in Showtime’s The Tudors as well as Clu’s evil sidekick in TRON: Legacy. I loved all of my interviews, but I would have to honestly say that I loved theirs the most. They were super animated and Bruce even got into character for a moment, which was really cool. Boxleitner was genuinely stoked that TRON has inspired a lot of people to get into technology.

My focus on the 2nd half is around the glamor of the TRON fashion world. Beau Garrett plays a role as one of the sirens (I’ll explain what these beautiful women do later..) in TRON and Michael Sheen is in charge of the End Of Line club. Christine led the team that put together the amazing outfits featured in the movie and she’s a true geek and was excited that we were actually interested in how everyone fit into those suits and still looked amazing; let’s put it this way — there’s a LOT of compression. She doesn’t advise that any of us try this at home and suggests that we become familiar with Home Depot and some reflective tape for our own suits. If you decide to take her advice, just be careful that you don’t end up looking like TRON Guy….