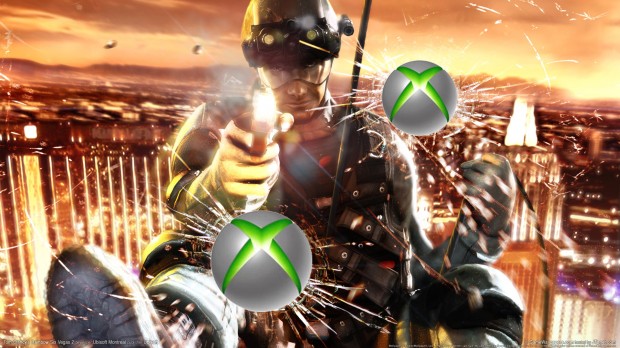 I recently purchased Rainbow Six Vegas 2 on Xbox Live. My friend has it and we wanted to have a coop campaign marathon. It didn’t work and that’s not all of it.

Rainbow Six Vegas 2 was released two years ago by Ubisoft. I’ve always been a fan of Rainbow Six and I like the game. Buying it for 30€ was a bold thing to do but I thought playing with my friend will be worth it. I’m lazy and the comfort of not standing up from the sofa was also tempting. Anyway, I bought the game, fired it up and started a session for my friend to join. Then the following error message appeared on his screen: “Please insert the RB6V2 Disk”. Okay that’s odd since he has the disc in the tray. Next step was that my friend tried to host a game but this resulted in the same error message on my end.

Comparing our games revealed that his version is called TC’s Rainbow Six Vegas 2 while my version is titled RB6V2. Something must be wrong here. We have the same game but it shows up as we have different games. What’s going on?

After having a lengthy chat with several Xbox Live support technicians and a series of escalations it turns out that my version has several incompatibility issues with earlier releases of the game. Ubisoft apparently sold a different game in 2008 than that’s on the Xbox Live Marketplace today. This means that just after two years the game is no longer supported by the developers. They don’t even try to have consistency. You buy the game and realize that you can only play with people who have the exact same version. This resulted in two (2!) games that I’ve found online on Live. When I buy a game I want to be able to play with someone from Kazakhstan. When I buy a game I want it to be supported for more than 24 months. Somehow this makes me think that video games are starting to hold less and less value for gamers. There is a new Call Of Duty title every year. To me this is bad because when I spend 60€ on a brand new game I want it to be worth it. I want to play it for a long time, I want to get the value back in entertainment. I played Modern Warfare 2 for 3 days. Rainbow Six Rogue Spear on the other hand, for three years. What’s even more disturbing is the technician said that they have this problem with various “older” titles. Beware, it very well may be that the game you buy from Xbox Live will not be compatible with the disc version. Of course there is no way to know. It’s kind of a game in the game you see.

This is all okay since making video games is a business. The more games you make (sell) the more money you make. What I can’t understand is how can Microsoft sell this game like this. At least they could have a note saying something like “this game is only compatible with the same versions and can not be played online with other versions of the game”. Of course refund is not possible. I feel cheated and I can’t play with my friend. Thank you, Ubisoft, thanks Microsoft.