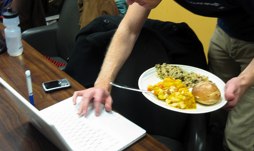 We know that email has done away with the nine to five job but does anyone ignore emails over holidays like Christmas and Thanksgiving anymore? A new study by email software company Xobni suggests that going completely offline from email over the holidays may also be a thing of the past. According to the survey, 59 percent of U.S. working adults will check work email over holidays.

Of the survey respondents over half (55%) check work email at least once a day and more than one in four (28%) do so multiple times throughout the day. The data also showed that 79 percent of those that check email while on holiday stated that they have received a work-related email from a colleague or client on holidays.

So are U.S. worker happy about the onslaught of email over the holidays? According to the survey, 15 percent are “thankful” or “relieved” to have the distraction of work email over the holidays. On the other hand, 41 percent of those that receive an email from a co-worker/client while they had time off for the holidays saying they are either annoyed, frustrated or resentful after receiving these emails. The survey also found that 12 percent of respondents actually “dread” seeing work emails populate their inbox and 10 percent even feel pity for those who do send work-related emails on holidays.

Regardless of how the actually feel about work email over a holiday, 42 percent of those that check work email while they have time off for the holidays still believe that staying up-to-date on email eases their workloads once they return from break. Some respondents (19 percent percent) that receive work emails from a co-worker/client while they had time off for the holidays say they feel “thankful” or “relieved” at having the distraction.

So what about the breakdown when it comes to males vs. females? Xobni says that
employed males are significantly more likely to check work email on holidays – 67 percent – compared to just 50 percent of women. Employed middle-aged adults feel the greatest urge, with 65 percent of those aged 35-44 stating that they have checked work emails on holidays.

One in ten (10 percent) who admitted to checking email while off for a holiday stated that they did so while spending time with friends or relatives at Holiday parties/gatherings or during meals. A small amount of those (5%) that check work email while they have time off for the holidays even admitted to using work email as excuse to avoid awkward family moments and other holiday commitments.