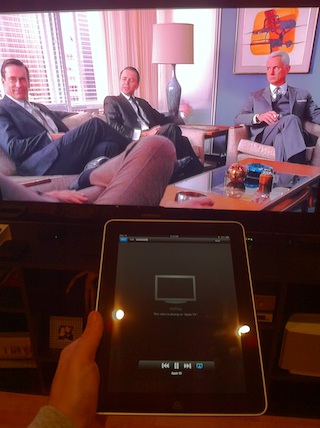 Back in June, Apple unveiled something that was both a blessing and a curse for the company: iOS 4. It was a blessing because it was the most stable, fastest, and most feature-rich version of iOS yet. But it was also a curse because it wasn’t yet ready for the iPad. That meant that Apple’s latest flagship device was left running old software. For months. Well, not anymore.

Yes, after rumors of an impending launch for weeks now, iOS 4.2 is finally here. And with it comes a true unification of the iOS platform for the first time since the iPad was released. That means the iPad will gain a bevy of new features that have so far only been on the iPhone and iPod touch.

Fast app switching, background tasks, unified inbox, email threads, Game Center, and folders are all now here for the iPad. Plus, two addition features come alongside iOS 4.2, specifically: AirPrint and AirPlay. “It feels like an entirely new iPad experience,” is how Apple puts it.

Having used the developer builds of 4.2 for the past few months, it’s hard to imagine ever going back to life without it. That was a legitimate complaint I had shortly after iOS 4 launched for the iPhone — it made my new iPad feel somewhat old. I found myself double clicking the button to fast app switch, and nothing would happen. The lack of folder organization drove me insane.

But all of that ends today. (And kudos to The Loop for pretty much nailing back in March that the unification would take place around now with a version number very close to what we got.)

So since the developer versions have been out for a while, plenty of you probably already know what to expect. But just in case you don’t here’s a rundown of the key features:

Folders: It used to be that you could have 11 screens on your iPad with up to 20 apps on each screen. With iOS 4.2 folders, you can have 11 screens with 20 folders, each of which can have 20 apps in them. That’s 8 more than the iPhone/iPod touch can hold in folders, thanks to the larger screen on the iPad. That’s over 4,000 apps you can potentially hold on the device.

Email: There is now a single unified inbox view for email which gives you one place to see all of the mail from each of your connected accounts. (You can still click on individual accounts if you wish to see them separately.) And threading has been added to the email app for the first time on the iPad, so you can more easily follow conversations. Also big: the iPad can now support multiple Exchange accounts for the first time. 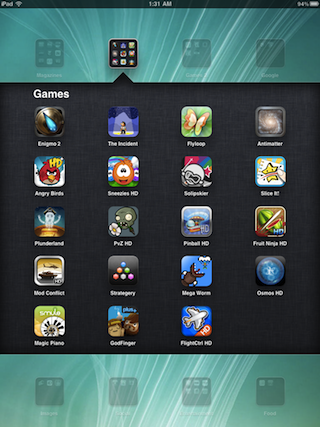 New Global Controls: If you double-click and swipe to the left, you’ll find the new global control panel. While it’s the same idea as the version for the iPhone, it’s larger thanks to the larger screen on the iPad. Here you can not only control your media that’s currently playing, but you can also set the brightness of your screen. And here’s where you now do the orientation lock (yes, the side switch is now officially only a “silent” switch).

Game Center: iPad games will finally be able to take advantage of the social gaming network that iPhone/iPod touch users have been using for months. I got a chance to test out a racing game for the iPad with Game Center and it was smooth sailing. I’m told that thanks to the iOS 4.2 unification, you’ll be able to play certain games across iPhones and iPads as well.

But the two features that haven’t been talked about too much because they’re new to iOS 4.2 specifically, may be the coolest: AirPrint and AirPlay.

Despite rumors of the death/postponement of AirPrint, it is definitely here in 4.2. I was given a demo of it in action with a compatible printer made by HP. It worked flawlessly. You can print all kinds of things: web pages, Pages documents, Numbers documents, etc. The process for doing it is dead simple. And, as the name implies, it’s all done wirelessly over WiFi.

Sadly, it will only work for now with the specially-made HP printers that have incorporated AirPrint. But Apple says more should be on the way. And while the people I spoke with weren’t sure about it, they didn’t rule out the idea of being able to retrofit older printers via some sort of add-on.

But the best new feature of iOS 4.2 is AirPlay. While Apple demoed it originally over the Summer, it’s now fully functional. With it, you can send not only audio from your iPad (or iPhone/iPod touch) to your Apple TV to play over your living room speakers, but video as well. It’s fairly amazing how well it works. 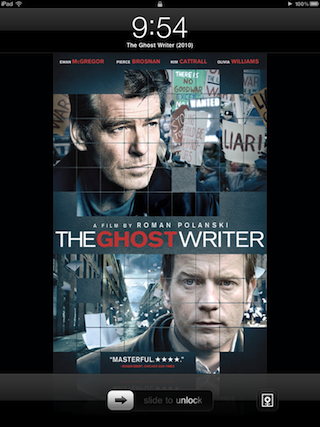 This evening, I watched an HD movie streaming wirelessly from the iPad to the Apple TV. There wasn’t one hiccup during the entire two-hour film. And while you might think something like that would be a battery hog, because you can turn off the screen on the iPad while it streams, running one entire movie only ran the iPad battery down from 100 percent to 94 percent. In theory, I could have played almost 20 full-length movies this way.

If you do have the screen on while you’re streaming, you can control the playback (pause, fast-forward, etc). And you can click a button to bring the video/audio back to your iPad. And while you’re using AirPlay to stream, you can do other things on your iPad and it won’t interrupt a thing. I surfed the web for the first 15 minutes the movie was streaming. Again, no hiccups.

Currently, only Apple’s own Video app and their YouTube app work with the video AirPlay functionality. But there are rumors that Netflix may as well with an update. Audio works with many more services, such as Pandora.

Right now, you do need an Apple TV (or AirPlay device like AirPort express for audio) to get AirPlay streaming into your living room. But the plan is to let other partners build it in to their hardware as well. And they should, it’s a pretty killer feature. Imagine being able to take your iPhone/iPad over to a friend’s house and streaming any movie you have with you to their screen. There’s no need to enter any passwords, or jump through any copyright hoops, because it’s all streaming from your device to the TV.

Apple TV will require an update (4.1) to do AirPlay video, but that should be available today as well, I’m told.

Oh, and you can send pictures video AirPlay as well, if that interests you.

iOS 4.2 brings one other interesting thing for the iPad: Find My iPad — for free. Yes, Apple is letting people sign up for free MobileMe accounts for the first time. To be clear, those with free accounts will only have access to the one feature. But still, it’s free. With the feature, you can send an audio alert to the iPad to help you find it, or remote lock/wipe it.

Look for iOS 4.2 to be released shortly. It will be a free update. Many of the 40,000+ iPad-specific apps are already 4.2-compatible, but I’m sure we’ll be seeing a huge wave of updates in the coming days as well.

So there you go, the iPad is finally up-to-speed with the must-have features of iOS 4. It’s as if the nearly eight-month-old device has just found the Fountain of Youth. And now the speculation about the iPad 2 can truly begin.

More: No, MobileMe Isn’t Totally Free, But Find My iPhone/iPad Now Is