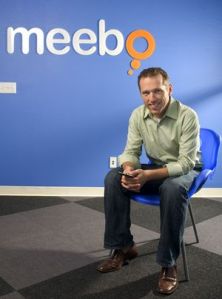 Pivot. It is the new buzzword seemingly taking on a life of its own ala “SUPER ANGEL” after this iconic, viral talk by Mike Maples. Ngmoco did it and cashed in big time. Instagram did it and became an app sensation. Twitter did it, and became, well, Twitter. And now Meebo has done it and raised another $25 million from Khosla Ventures to continue building its business.

Seth Sternberg, Meebo co-founder and CEO, stopped by our studio after Web 2.0 to tell us about how the site became so much more than Web-based IM and how he says the company is nailing the discovery problem in a new, more powerful way than Digg, StumbleUpon, Delicious and everyone that came before.

They reach 180 million uniques world-wide every month. How’d they get there? Moving from a product the founders wanted to build to a product other sites and users wanted them to build, and an emphasis on “building a product for normal people, not Silicon Valley.”

Sternberg explains what he means in the video below. Tomorrow, we’ll be posting part two of our interview with Sternberg where we talk about the value (declining value) of “reach” in an age of huge platforms with instant distribution. I also pry a few revenue details out of Sternberg. You won’t want to miss it.