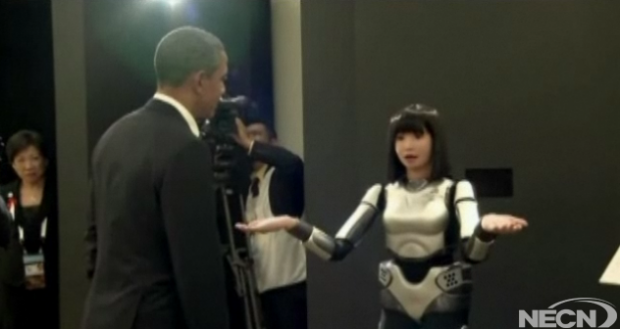 The APEC (Asia-Pacific Economic Cooperation) 2010 summit, which high-ranking politicians of 21 countries attended (and which ended yesterday), isn’t normally something of interest for CrunchGear. But this time, the event was held in Japan, which used the opportunity to show off its dominant position in robotics.

And in the video embedded below, you can see no other than President Obama walking by a couple of made-in-Japan robots. He couldn’t resist and played around with the HRP-4C humanoid, robotic baby seal Paro, and Toyota’s mobility robot i-Real.

Too bad Obama didn’t feel comfortable enough to drive around sitting in the i-Real. Here’s the video: