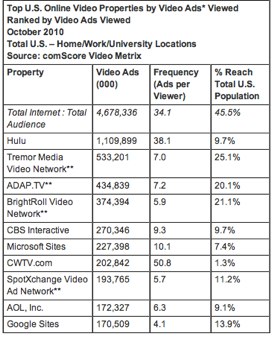 Tremor Media Video Network ranked second overall (and highest among video ad networks) with 533 million ad views, followed by ADAP.TV (435 million) and BrightRoll Video Network (374 million). Video ads reached 45 percent of the total U.S. population an average of 34 times during the month. Whereas Hulu served the highest frequency of ads to its viewers in September (an average of 27.5 over the course of the month); CWTV.com took the top spot in October. CWTV served an average of 50.8 in October.

comScore reports that the top video ad networks with respect to their overall reach in the U.S. are ScanScout at 44.3 percent, Break Media at 42.0 percent and BrightRoll Video Network at 41.9 percent. Video ads accounted for 12.8 percent of all videos viewed and 1.2 percent of all minutes spent viewing video online.

In terms of video properties and viewership, Google Sites (whose traffic is mainly YouTube) had 146.3 million unique viewers; Yahoo took the second spot again since September with 53.8 million viewers, followed by Viacom Digital, which jumped by 4 positions in October with 52.9 million viewers. VEVO came in fourth place with 47.6 million viewers and Facebook dropped to the fifth spot after a strong performance in August with 47.4 million viewers Google Sites saw over 2 billion viewing sessions in October, and average time spent per viewer at 272 minutes, or 4.5 hours.

The Hulu numbers are no doubt impressive, and certainly helps the company as it reportedly prepares to go public in the next few months. Hulu CEO Jason Kilar said last week that Hulu now has 30 million users monthly and estimates it will rake in $240 million in 2010, more than double its $108 million revenue in 2009. He also said that the service now has 260 million content streams, 800 million ad streams and over 235 content partners and 352 ad clients.

It’s important to note that while Google is behind Hulu in terms of video ad impressions, YouTube does serve other types of advertising (banner ads, overlays, branded players) that are not factored into comScore’s data.