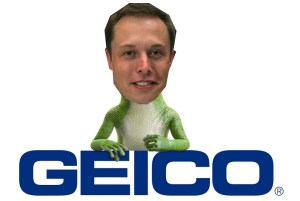 Last month, the world raised a quizzical eyebrow towards a new advertising campaign for Stolichnaya vodka, starring two Biz Stones, hanging out with each other in a bar. This month it’s the turn of Foursquare’s Dennis Crowley and Naveen Selvadurai, posing in chunky knitwear  (and with only the merest hint of homoeroticism) to promote Gap.

To say the thinking behind the ads is muddled is to use comical understatement. As I write these words, millions of Gap shoppers and Stoli drinkers are staring blankly at the over-airbrushed, bizarrely ill-conceived advertisements, thinking “yeah, I’ve heard of Twitter but who the hell is that dude? And what’s a Foursquare? Is it a Facebook thing?”

In fact, if I were a cynical man I might draw a few appropriately cynical conclusions from corporate America’s new-found obsession with tech entrepreneurs whom 99.9999% of the population couldn’t pick out of a police line-up.

I might, for example, suggest that the commercials are what happens when some the world’s biggest brands realise that they know jack-all about the media habits of their target customers and so, rather than admitting defeat, simply throw a burlap sack of money at a dick-headed gaggle of 20 year old sub-junior creative directors who form their entire concept of what constitutes ‘celebrity’ from the pages of Gawker and their friends’ Facebook walls. I might also bandy around phrases like “cringeworthy”, “embarrassingly ill-conceived” and “should be lined up against the stark white walls of their painfully minimalistic Madison Avenue offices and shot twice at close range”.

Fortunately, though, I’m not a cynical man. And as such I’m able to appreciate the true brilliance of the commercials. I mean, sure, maybe only fifty people in Silicon Valley and Manhattan will understand the ads… will appreciate why a photo of Biz Stone, getting slowly drunk with only himself for company is actually a brilliantly arch comment on the media’s obsession with Evan Williams and Jack Dorsey. Or will comprehend why choosing the founders of Foursquare to model clothing from the official uniform supplier to unemployed hipster wannabes is a piece of pitch-perfect commercial satire, worthy of Adbusters.

…but, while the number of people who truly grok the ads might be small, those fifty people also happen to have a frightening level of disposable income, along with the commensurate level of youthful naivete required to blow it all on mid-range vodka and woolen beanies. After all, the cash they just raised to build their awesome new “Groupon for Q&As” platform isn’t going to spend itself.

With the banks in ruin and Bernie Madoff in jail, these kids are America’s new highest-spending demographic and the further advertisers can dig into the Internet’s navel to find spokesmodels, the more likely these new-new-new rich kids are to respond. With that in mind, look out for the following Silicon-Valley-themed product endorsements this holiday season…