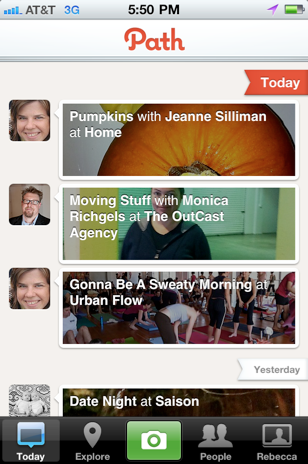 Over the last few months there’s been plenty of buzz and speculation about Path, a hitherto “stealthish” company that was founded by long time Facebook employee Dave Morin, along with Shawn Fanning and Dustin Mierau. The company has raised funding from a very impressive list of investors that includes Ron Conway, Paul Buchheit, Keith Rabois, Ashton Kutcher, and a laundry list of Facebook alumni. And tonight, it’s ready for its big debut. You can grab the free app on the App Store right here.

So what is Path? In short, it’s a private photo sharing network — think Instagram, but without the filters and with a privacy model that takes away any anxiety associated with sharing photos with people you don’t know. It’s based around email addresses and phone numbers, rather than a public database of users. And compared to other popular social applications, Path is going against the grain: there’s no follow system and the friend system is also quite different from what you’re used to on Facebook.

Path is using a system where you specify who exactly you want to share your photos with. After firing up the app, you’ll be asked to select contacts from your phone’s address book — tap a few, and from then on, those contacts will see your shared photo items in their feed automatically (they don’t have to accept anything, but they can block or temporarily ‘mute’ you if they don’t want to see your content). Path wants the entire experience to be personal enough that you won’t feel nervous about sharing your photos, so it’s limiting the maximum number of friends to 50.

And note that there isn’t a request system to speak of — it’s up to you to take the initiative to share photos with the people you care about. Of course, you can still pester your friends in real life should they forget to share their content with you.

Path is taking a unique approach to a few other areas of photo sharing. The first is a feature called ‘Seen’. If I share a photo with my friends, I’ll be able to see which of them has actually seen my photo. Yes, that sounds a little weird, but remember that the idea is that these photos are being shared with close personal friends. Morin says that this helps skip the initial “Hey did you see that photo?” question that’s common when friends talk about content shared on social networks — this way you can just jump right into a conversation about the content. 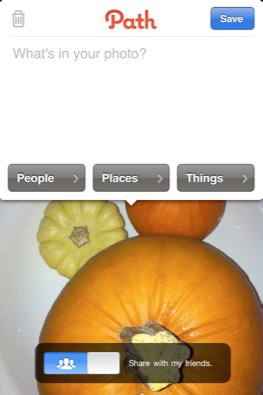 The application is also omitting comments and captioning for now, in favor of tags. After posting an image, you’ll be asked to associate tag it with the people in the photo (pretty standard), its location (again, standard), and finally with a Thing the photo is associated with. This Thing component can be anything that’s associated with what you were doing. Taking a photo of your graduation dinner? The Thing would be Graduation. Eating dinner at a thai restaurant? The thing could be the dish you ordered.

Path’s restrictive friending system is going to hamper its virality to some extent (the app won’t spam your whole address book of friends with an invite). But Morin contends that it will still spread between circles of friends. And there still is some virality — when you add a friend to your Path who isn’t on the service yet, they’ll get an invitation in their email inbox.

I think Path could find a solid niche — there are certainly plenty of photos that I’m not comfortable posting on Twitter (usually because they’re boring if you don’t know the people in the photos). And Path would be perfect for that. But it’s going to have to rely more on word-of-mouth than any of its competitors — you won’t be seeing any tweets to photo on Path, for example — which may make growth tricky.