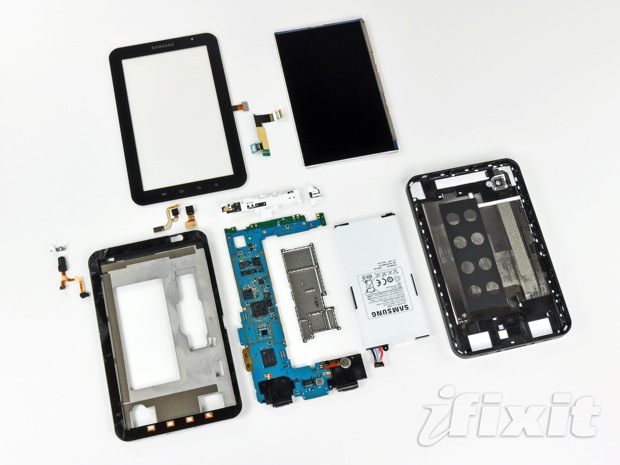 What’s inside a Samsung Galaxy Tab? Not snips, snails, or puppy dog tails. Instead you fine a large battery, an ARM A8 Hummingbird processor, and all the build quality of an Apple product.

After pulling off the screen, iFixIt got to the guts fairly quickly and they had a bit to say about the reparability and processing power.

The Galaxy Tab’s industrial design shows that Samsung is definitely mimicking Apple. Looking like an unlikely offspring between the iPad and the iPhone 4, the Tab has an iPad-like front fascia as well as a camera-equipped back cover similar to the not-yet-released white iPhone. Even the dock connector very closely mimics Apple’s standard pinout.

But that’s where the similarities stop. Within the Tab lies a Samsung-branded 1 GHz Hummingbird processor instead of Apple’s A4 (although both chips share the same ARM A8 processor architecture). There’s a full gig of RAM, 128 MB of Samsung OneDRAM, and 384 MB of Mobile DDR within the same processor package, in addition to 16GB of SanDisk NAND flash storage. If you’re counting, that’s 1.5 GB of total RAM and RAM-like caches. We expect that with this kind of internal hardware, the Tab should work really well with Android apps. But our twitchy hands took it apart the moment we saw it, so we’ll leave the software side for everyone else to explore.

We gave the Tab a repairability score of 6 out of 10. You have to use some unconventional tools — including a heat gun, guitar picks, and a tri-wing screwdriver — in order to fully disassemble the device. But the battery is replaceable without having to spring for a soldering iron, and other components (such as the headphone jack) disconnect pretty easily once you’re inside.