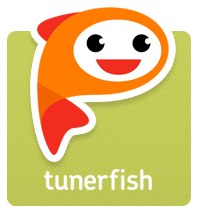 A few months ago, we got a glimpse of Tunerfish, Comcast’s attempt at social video discovery, at TechCrunch Disrupt in New York. Incubated by the Plaxo team, Tunerfish made its real world debut in June; featuring a deal with HBO. And in August, Tunerfish released its first iPhone app, allowing users to interact with TV shows on the go. Today, the service is adding a number of new features, and releasing an updated version of its iPhone app and a new logo.

Tunerfish allows people to share with a single click what they are watching, on their social network(s) of choice in real time. Much like Twitter does for tweets, Tunerfish also displays which TV shows are trending among your friends (in the last hour, 24 hours, etc.), which gives users a way to discover shows they are not yet familiar with. The site also encourages people to check-in to shows on both its web-based app and iPhone app, much like you would in Foursquare or Gowalla.

The UI of Tunerfish has been updated to provider a sleeker, more user-friendly interface, making it easier to share, to comment, and to start or join a conversation. Previously, the only way to sign up for Tunerfish was via your Facebook or Twitter account but now you can register and sign-in via the conventional email/password combination.

Tunerfish’s iPhone app has been updated with pull-to-refresh updates and an option to share the awards you earn from the service with your friends and followers on Facebook and Twitter.

So how is Tunerfish doing five months out? TV check-ins via Tunerfish in October were up 500% compared with July. But the site has only seen 60,000 check-ins in October, compared to the millions of check-ins per month that GetGlue, a competitor, is currently seeing per month. But Tunerfish’s John McCrea says that “with any new social app, it is the month-over-month growth that one wants to see.”