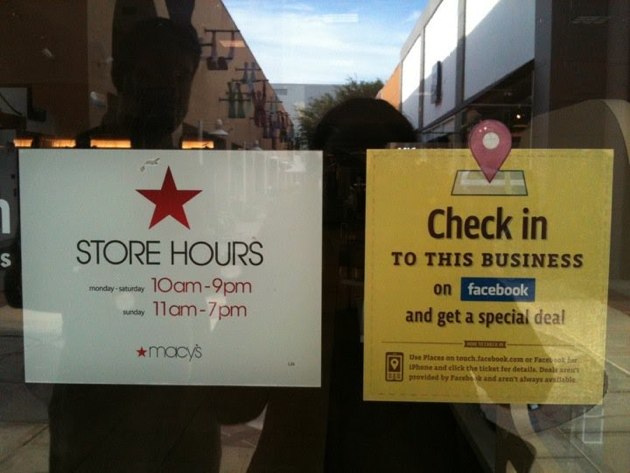 We’re in the midst of a very important race that could help dictate the future of location-based services. But instead of the usual Silicon Valley weapons of engineering talent and network effects, this one is a bit less technical. It’s all about stickers.

Head to the Macy’s in downtown San Francisco right now and you’ll see a prominent sticker at the entrance prompting you to check-in using Facebook to get a special deal. That’s pretty impressive given that Facebook only launched its its deals service a week ago. And it’s only a taste of what’s to come — expect to see many other large retailers start to slap on Facebook’s stickers as the social network flexes its biz dev muscles.

These windows stickers aren’t anything new. Yelp is probably the best known web company to use the tactic, and has long distributed stickers to businesses with the slogan “People Love Us On Yelp!”. Over the summer, Foursquare began distributing its own stickers that prompt users to check-in. And Facebook has actually been distributing stickers of its own to help businesses promote their Facebook Pages since April. But these deal and location stickers could be different.

Right now, many people (probably most people) have no idea what a check-in is. When Gap launched its free jeans deal, people were actually visiting the company’s Facebook Page to write “checking in“, rather than using the Places function on Facebook’s mobile application. But over the next few months that’s going to change, because more businesses are going to offer deals and users will have a financial incentive to figure out how these things work. And once they do, they’ll start looking for the sticker of the service they’re familiar with.

In other words, these stickers are really a physical proxy for each service’s mindshare. Some businesses will probably slap on a bunch of window stickers inviting their users to check-in on Facebook, Foursquare, SCVNGR, and more. Others — and I suspect, the majority of businesses — will pick one service and stick with it to avoid customer confusion (and so that they don’t have to do deal with managing deals on multiple services). And right now, my money is on Facebook winning out for that window space.

Customers may not initially understand how a check-in works, but they’re probably on Facebook already, whereas Foursquare is probably something they’ve just heard a lot about on the news. Foursquare had several month’s head start and may be able to combat this by distributing stickers and other promotions on an even larger scale, but I think it’s too late for that — they’ll need to focus more on adding value on top of check-ins (and it sounds like the company knows this).

Adding a bit more fuel to Facebook’s fire: we just got a tip that a local Chipotle just received a big box of Facebook Deals stickers. Free burritos, anyone?