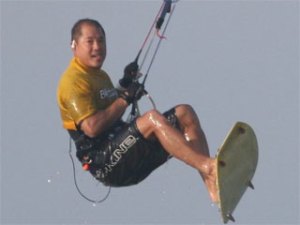 Bill Tai is one those VCs who has a million great war stories– whether it’s about starting companies or death-defying kiteboarding stunts. That’s right, I said kiteboarding stunts. I know it’s a fad with a lot of Google executives and VCs these days, but Tai is actually a paid, sponsored athlete. He’s going to be the International Kiteboarding Association’s ambassador to 2016 Olympics in Rio, in fact.

But more to the point for TechCrunch readers, Tai is a serial entrepreneur who has funded iAsiaWorks, which went public on Nasdaq, and sold two other companies, IPinfusion and Tradebeam. Unlike a lot of newer VCs, Tai has a lot of experience with Nasdaq. He has served on the board of seven companies that have gone public, and invested in eight more that have.

Tai stood out during the dot com bubble for calling it a bubble, keeping a cool head as the legendary venture firm, IVP, split into three firms: Versant Ventures, IVP and Redpoint Ventures. Tai joined Charles River Ventures in the early 2000s and helped build the firm’s West Coast presence, funding deals as varied as Maxthon, one of the largest browser in China, nanotech company Nantero and Scribd.

Tai holds things close to the vest, but in my experience he’ll answer a direct question honestly and he’s seen it all. So send in your questions now to askavc(at)techcrunch(dot)com. As always, the show will post on Friday afternoon.