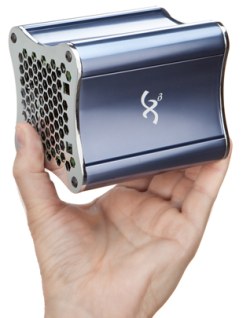 I’m not sure how to interpret this device, being marketed by Xi3 as a revolution in computing. From the press release: “We reject the concept that computers should have a useful life of only two to four years,” said Jason A. Sullivan, President and CEO of Xi3 Corporation. “Instead we believe that computers should be upgradeable and updateable over and over and over again, and that’s how we’ve designed the Xi3 Modular Computer, making it (potentially) the last computer you ever need to buy.”

I’m sorry, but I’m pretty sure that almost every desktop computer sold is exactly what this person is describing. Every component is replaceable with a new one, everything is modular. The idea of the single motherboard, which ironically enough they have replaced with multiple smaller, proprietary sisterboards, was created with the idea of a modular system.

In fact, this Xi3 concept provides far less freedom than a simple budget motherboard, compact case, and OEM parts. You can replace any of them at will. A child can do it. With Xi3, you’re free to upgrade… with their hardware, which they sell. And it ain’t cheap — the basic setup with 8GB of storage and a low-wattage AMD processor costs you $849. I hope it comes with free diamonds!

If you want a compact PC, go with VIA or some other micro-ATX PC. They’ve been around for ages, they use standard parts, and they’re as easy to upgrade as any other computer. Unless I’m seriously mistaking what this Xi3 thing is, there’s absolutely no benefit to buying one over a standard PC.