The New York Observer has shined a light on thingd, a stealthy New York-based startup that is currently attracting a lot of high-profile attention – and funds – in tech circles. Turns out it’s a pretty ambitious venture run by some really smart people that has attracted some seriously big-name backers. Which is more than enough to spark our interest.

I just talked to thingd (short for “thing daemon”) founder and CEO Joseph Einhorn, who puts the company’s mission bluntly: “We want to build a database of every thing in the world”.

Or, the “Facebook of stuff” as The Observer put it in its article headline.

The company plans to accomplish that not-so-easy-to-accomplish feat by intelligently crawling the entire Web and building an index of objects based on the data they gather, as well as the attributes of those things wherever they can find them. At a later stage, thingd plans to get the community involved, too (gdgt is doing this for consumer electronics).

Already, thingd boasts more than 100 million item in its database and north of 1 billion associated attributes of those things, Einhorn tells me.

Here are some clues to what one can do with access to that amount and type of data: Fancy, ProductIds.org and Plastastic – or look at the images in this blog post.

The company should soon be coming out with an API for third parties to use (also check out FluidDB).

In Einhorn’s words: “We are aiming for a world where, the same way Facebook recognizes the faces in your photos, we might be a part of enabling a similar experience around things. We want to connect people to things, and people to things to other people”.

No doubt, more information on what thingd is building will emerge over time, but Einhorn and his now 9-people strong team have apparently been plucking away at this for years.

Einhorn, for one, has an impressive resume despite his young age (29). When he was 16, he became the first employee of Capital IQ, which structured financial data for hedge funds and money managers – the company was acquired by S&P for $200 million when Einhorn was 22.

He went on to found Inform Technologies, which helps publishers such as CNN, CBS, The Economist and Condé Nast better organize and present their content.

It’s actually kind of insane that a company with such an audacious goal and sharp founder has managed to stay largely under the radar. Particularly when you look at the impressive roster of investors currently backing thingd:

To be continued, no doubt. 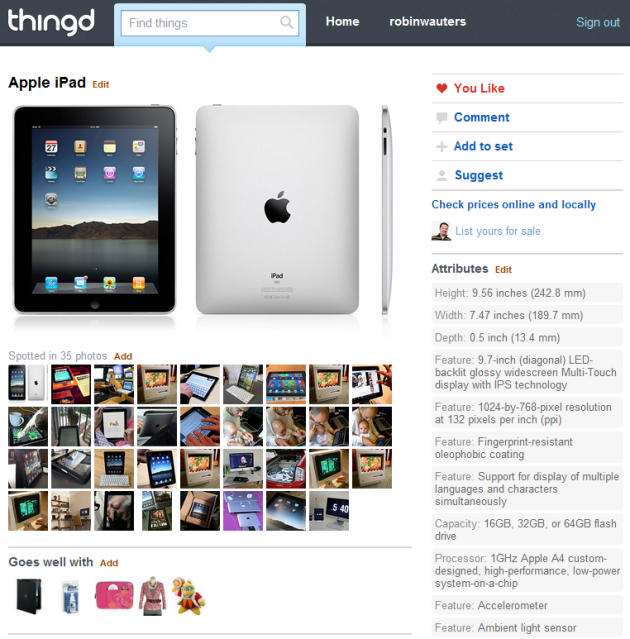