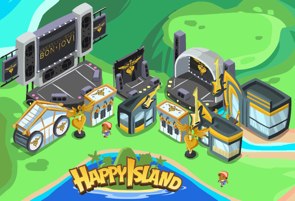 Bon Jovi is getting into social gaming today by distributing the band’s digital music through games on Facebook. The band is partnering with CrowdStar to bundle its digital album, virtual goods and virtual currency together on the gaming platform’s social games—Happy Aquarium, Happy Island and It Girl.

So as users play the games, players will be given the opportunity to purchase the Bon Jovi Greatest Hits Bundle which includes a digital download of Bon Jovi’s Greatest Hits, Facebook Credits, as well as branded Bon Jovi virtual goods that enable special benefits within the games, and a coupon code for the Bon Jovi online store.

The idea of downloading premium music while buying virtual currency is a compelling. It’s definitely a unique distribution strategy for musical artists to start bundling virtual goods, currency and downloads into one package. While it’s unclear how much money Bon Jovi will really be seeing, but the campaign is sure to draw eyeballs, which may be the primary reason for the partnership (the deal was conceived by interactive agency Sparkart). CrowdStar’s games have more than 50 million monthly active players, and are competing with the likes of Playfish, Playdom and Zynga.

We could be seeing more artists flock to social gaming as a marketing platform in the New Year.