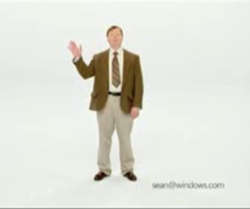 He’s the guy who starred in some of Microsoft’s “I’m a PC” commercials, which were obviously created in response to Apple’s anti-Microsoft “Get a Mac” advertising campaigns.

Sorry, Apple fanatics, he’ll still be a PC and has mucho love for the Redmond software giant, he tells Seattlepi.com.

Today is his last day – here’s the email he sent to his coworkers (again, via Seattlepi.com):

I was cutting grass in the summer of 1987 when my friend told me that DOS 3.3 just came in at our local computer store. I barely got the lawnmower in the garage before we took off. On the way there, I told myself that I had to work for Microsoft one day. Any company that could get me that wound up was the place I wanted to work. …

I hate leaving Microsoft after working so hard to get here, but a family situation has forced me to move to the East Coast. My current position doesn’t allow this, and I haven’t been able to find another role. As John Lennon said, “Life is what happens to you while you’re busy making other plans.” I have a lot of memories from my time at Microsoft, but the “I’m a PC” commercial is the highlight. I really feel proud that I was able to be a visible part of the company’s fight against Apple.

And here’s Siler in 1 of 3 commercials he appeared in: