Twitter is the preferred channel for quick banter for over 175 million users around the world including our political leaders. Over half of the heads of states and governments of the G20 meeting in Seoul on November 11 and 12 have an official Twitter account (http://twitter.com/Davos/G20).

Some like @BarackObama have 5.5 million followers, while others such as the French Presidency only have 6,600. All other G20 leaders are somewhere in between and yes, you’ve guessed it, none of them tweet personally.

What’s interesting though is not who has the most followers, but rather who follows who.

Grand master in the art of political tweets @BarackObama ranks fifth in the world and mutually follows his Russian counterpart Dmitry Medvedev @KremlinRussia_E who sent his first tweet in late June. The Russian president is very active, especially Twitpicing, and now has over 160,000 followers on his English and Russian accounts combined.

The @KremlinRussia_E and the @WhiteHouse both follow UK Prime Minister David Cameron @Number10gov. These three could actually conduct a direct and secret Twitter diplomacy in 140 characters literally spelling ‘the end of those red phones that have been sitting around for so long’ as Barack Obama recently joked. 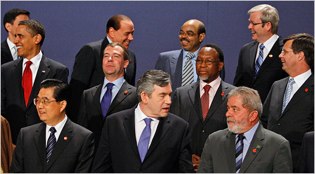 However, only London and Moscow follow Canada’s @PMHarper who @BarackObama and the @WhiteHouse seem to ignore. But it gets worse! None of the big four follow the other G20 members on Twitter. Neither is following @DilmaBR, the new president of Brazil, nor @JuliaGillard, the Prime Minister of Australia or the presidents of Korea @BluehouseKorea, France @Elysée, Mexico @FelipeCalderon, South Africa @PresidencyZA or Turkey @cbAbdullahGul.

At the Franco-British summit last Tuesday @Number10gov started to follow the @Elysée Palace which had not immediately reciprocated. In fact the French Presidency is following no one and therefore Nicolas Sarkozy cannot have a private conversation with his peers on Twitter.

And finally, for the record: while the Russian and Mexican presidents tweeted public congratulations to the new Brazilian president on her recent election win, neither had the foresight to actually follow her. Only exception: Venezuela’s President Hugo Chavez @ChavezCandanga who talked to Dilma Rousseff on the phone and immediately started following her.

Matthias Lüfkens (@Luefkens) is Head of Social Networks at the World Economic Forum, He is an occasional contributor to the Swiss-French magazine Bilan (www.bilan.ch) and blogs in French at http://lufkens.wordpress.com/.