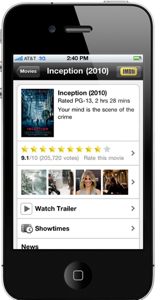 Amazon-owned IMDb released a nifty iPad App earlier this year which allowed customers to access more than 1.5 million movie and TV titles with information on millions celebrities, actors, actresses, directors and crew members. The Movies and TV app also allowed users to access movie trailers, find localized movie showtimes in the U.S., and more. Today, the company is releasing brand new iPhone and iPad apps with a bunch of new features and functionality.

The homescreen has been redesigned to integrate the latest trailers of movies, and the apps both feature updated entertainment news from hundreds of media outlets. Another addition that could be useful for hardcore IMDb users is the ability log-in with IMDb Pro accounts from the app to access contact information and representation listings. Pro users will also be able to place calls from the app (for the iPhone app). The company is also pushing its IMDb “everywhere” strategy by allowing users to log-in with their Facebook account, and share information to Twitter and Facebook from the app.

IMDb’s apps are fairly popular so these new additions should only help increase downloads. The Movies & TV app for the iPhone and iPad has been installed by “millions” and is being downloaded at a rate of nearly 1 million per month. The site is also undergoing a complete redesign as it hits its 20th anniversary and released an Android app in June. 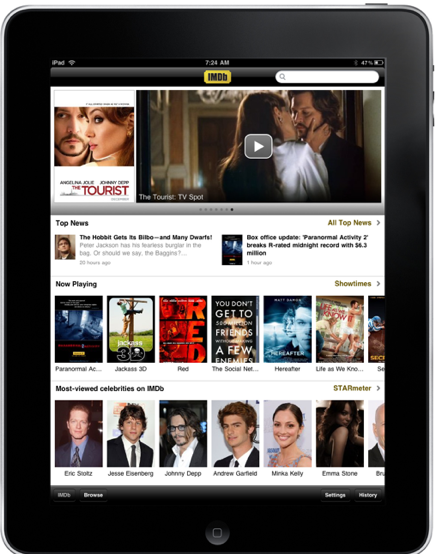