Twitter has just released an update to their Android app into the Market. So what’s new? Well, it’s faster for one thing. But perhaps more significantly, it now looks and functions much like their popular iPhone app.

Specifically, the Pull-to-Refresh and Swipe-to-Reveal features that have been standard on the iPhone version since it was still known as “Tweetie” have made their way to the Android version. There is also a new Tweets detail page that yes, looks exactly like the iPhone version.

Twitter promises that this latest version should be much faster. The company says they’re trying a new way of drawing timelines that should make scrolling smoother.

The company previously worked with the Android team at Google to ship the original version of the app. It was good, but not as good as Twitter for iPhone. Now they’ve taken the thing entirely in-house we’ve confirmed (it has been in-house since version 1.0.3 — this is version 1.0.5). And yes, it’s substantially better.

Of course, it’s still not quite iPhone-good. Pull-to-Refresh, for example, fails to bounce as you might expect on the iPhone. And Swipe-to-Reveal feels a little stale. But that’s most likely a lack of Android polish, not Twitter polish.

Oh, and you can finally quote a Tweet (on top of retweet it). 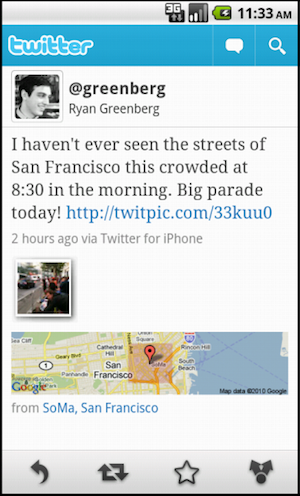 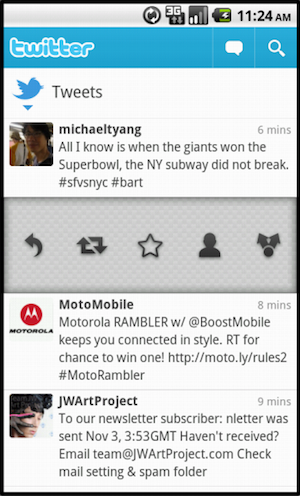