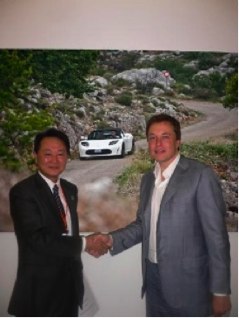 Consumer electronics maker Panasonic is cozying up to Tesla with a $30 million investment, in exchange for a 2% stake.

Although Panasonic and Tesla have worked together in the past, under the new partnership, the duo will closely collaborate on the development and marketing of new Tesla battery packs that feature Panasonic lithium-ion cells.

“Panasonic offers the highest energy-density cells and industry-leading performance with cutting edge Nickel-type cathode technology.” Tesla CEO Elon Musk said in a statement late Wednesday, “We believe our partnership with them will enable us to further improve our battery pack while reducing cost.”

Under the terms of the deal, Panasonic purchased Tesla’s stock in a private placement for a price of $21.15 a share.

The structure of this alliance is not out of the ordinary for the electric car maker, which has been richly funded but deficient in profits. Over the past two years, Tesla has strengthened strategic relationships with investment deals.

Notably, in May, Tesla and Japanese automaker Toyota announced a major partnership to cooperate on the development of new electric vehicles. As part of the deal, Toyota agreed to plunk down $50 million for Tesla’s common stock. And Toyota was not the first major corporation to bet on Elon Musk’s roadster. In 2009, Daimler invested an equivalent sum in exchange for a 10% stake and technology, according to reports.

Although Tesla is moving forward with plans to ramp up vehicle production over the next few years, the company has also placed a greater emphasis on its powertrain business, which services other car manufacturers. Last month, Tesla disclosed it had a $60 million contract to supply parts to Toyota for the production of the upcoming electric RAV4.

Clunky battery parts may seem relatively boring when compared to Tesla’s sleek roadsters, but it may be the key to finding their (so far elusive) path to stable profitability.