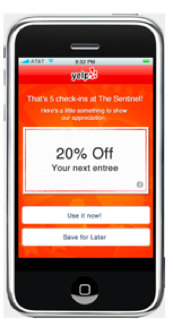 Yelp got into the location battle earlier this year when the local business listings and review site started allowing users to check-in to restaurants, bars and businesses. Foursquare as long been offering deals as an incentive to check-ins, allowing users to unlock discounts and coupons when they check-in to a venue. It looks like Yelp is following in the footsteps of Foursquare once again with the launch of Check-In Offers.

While details are limited, Check-In offers seem fairly simple. If you check-in to a venue, a merchant can offer you a special discount or coupon for checking in. Yelp also says that this is different from the Sales and Special Offers feature, which allows merchants to announce discounts on their Yelp listings. While we don’t know exactly how the offers will work, Yelp could possibly integrate its Groupon-like daily deals as well.

Yelp has had a history of copying some of Foursquare’s features beyond just the check-in. For example, Yelp also allows users to become “Duke” or “Duchess” of a venue, similar to Foursquare’s mayor feature. And the company was also considering adding badges to its arsenal.

It’s hard to blame Yelp for adopting some of Foursquare’s features, which have helped the location-based social network become popular. Facebook and Google have copied Foursquare with their own location-based initiatives. The fact is that local and location based networks are hot and everyone wants to throw their hat in the ring. And you know what they say— imitation is the sincerest form of flattery.