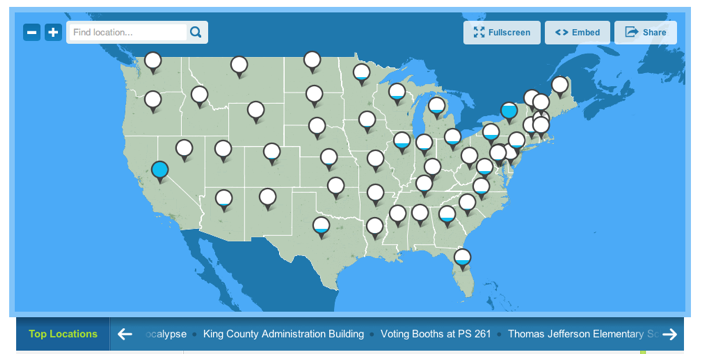 In conjunction with the mid-term elections held today, Foursquare launched its “I Voted” campaign which tracked check-ins at polling places throughout the day and evening. In preparation for the day, Foursquare loaded over 100,000 voting locations into its venue database. If users included a ‘#ivoted’ in their check-in, they received a special badge for the day. And Foursquare partnered with data visualization startup JESS3 to create a live, interactive map of each check in at polling sites. Just after the close of polling venues on the West Coast, Foursquare had clocked 49,478 check-ins from voters across the country (It looks like this number is slowly increasing).

California and New York led the pack with check-ins with 7,274 and 5,988 checkins respectively. In total, 58 percent of check-ins came from women and 42 percent came from men. Foursquare users checked into a total of 23,382 polling venues. While this is Foursquare’s first big election since launch, the startup is using the election platform has a guinea pig of sorts to develop a scalable system for the 2012 Presidential Election in a few years.

To put this in perspective, Facebook’s Randi Zuckerberg just Tweeted that over 11 million members declared that they voted on the social network today. Facebook encouraged members to use an interactive feature today which allows you to find polling place on the U.S. Politics Page and click the “I Voted” button to tell your friends you voted. According to the counter at the time of this post, 11.6 million Facebook members had voted in the election.