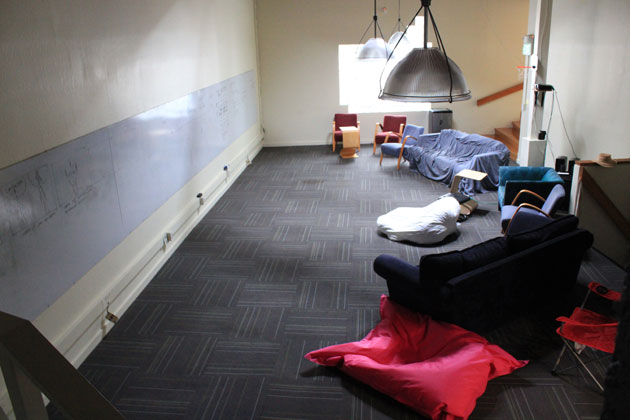 While the tech scene may be booming in the Bay Area right now when it comes to hiring, the real estate scene is not. But with Zynga about to move into a massive new office and Twitter currently looking for a new bigger space, the former could help the latter. But smaller spaces are still gonna need some help — like a cute website with a hook.

South Park is one of the nicest areas in the SoMa region of San Francisco. But even there it can be tough to find new tenants apparently. So the startup One Block Off The Grid (which we covered earlier this year when they got funding) is looking to sublet their space by setting up this site touting one major reason why a startup should rent it: it’s Twitter’s original office.

Sure, it’s $3,000 a month for 1,000 square feet, it has flexible lease terms, vaulted ceilings, access to high speed internet, and is in the middle of beautiful South Park. But who cares about any of that? This is about karma. This is the office where Twitter started to make the magic happen. Now they’re a service with 175 million users, adding 15 million or so a month.

Of course, Twitter fairly quickly moved from this site to a bigger space a block or so away (the space Xobni now inhabits). And then they moved again into Bebo’s old offices about a year ago — and took over a second floor in that building. Now, as they’ve surpassed 300 employees, they’re on the move again. But you can rent the space where it all began (well, unless you count the old Odeo offices, where Twitter began as a side project).

One day, perhaps this place will be featured in Before They Were Stars: Tech Startup Edition.