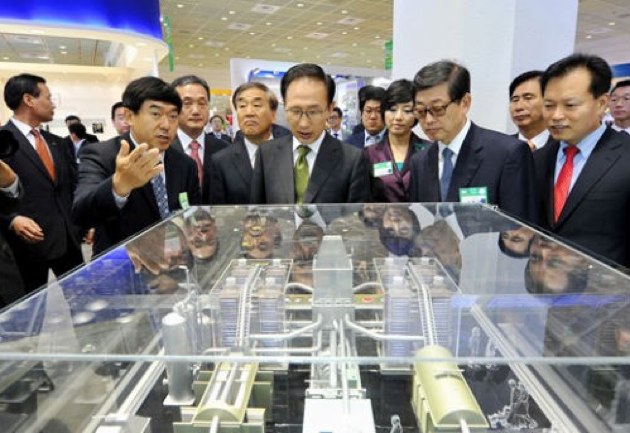 VC funding for cleantech startups tumbled in the third quarter, last week Vestas announced plans to layoff 3,000 employees, and on Wednesday, First Wind shelved IPO plans amid weak demand— the wind energy sector is certainly facing its share of headwinds but there are still signs of life.

On Tuesday, the South Korean government announced that it will invest 9.2 trillion won, or $8.2 billion, through 2019 to build offshore wind farms. According to reports, the goal is to have 500 wind turbines along the country’s west coast in the Yellow Sea with a capacity of 2500 megawatt hours.

The announcement seems to be a scaled down version of the government’s initial plans. In September, the Yonhap news agency said officials from the Ministry of Knowledge Economy were hoping to spend roughly 9 trillion won to install 1,000 wind turbines. As it turns out, the won doesn’t stretch as far in this capital intensive industry.

Although, the South Korean government may be more realistic these days, the country is not shying away from big investments in the larger cleantech space. If anything, South Korea seems to be picking up the pace. Just last month, the government announced a plan to work with the private sector to invest 40 million won in the renewable energy industry by 2015, with the government  contributing 7 million won and the private sector committing 33 million won. According to the Ministry of Knowledge Economy’s figures, South Korea’s clean energy exports are expected to exceed $36 billion by 2015.