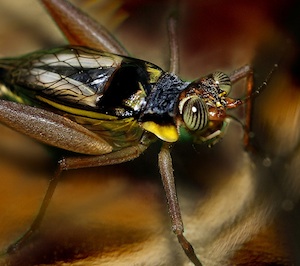 As we first reported late last week, Lars Rasmussen, the father of both Google Maps and Google Wave, has left Google is heading to Facebook. As we suspected, part of the reason is that Google pulled the plug on Wave barely a year into its existence. “It takes a while for something new and different to find its footing and I think Google was just not patient,” he told The Sydney Morning Herald over the weekend. And that brings up another question. Google’s other big social experiment this past year, Buzz, also hasn’t taken off yet. What happens next?

Like Wave, Buzz launched with much fanfare in February of this year. But unlike Wave, Buzz was available to many users right of the box, and instead it was security issues and misunderstandings that led to its initial stumbles. The Buzz team worked quickly to smooth those out, but now the service has a much more serious issue: indifference.

Despite being shoved in everyone’s face by way of its somewhat unnatural home in Gmail, Buzz has not caught on for social sharing in the same way that rivals Facebook and Twitter have. Yes, some stats point to it trending upwards, but it still doesn’t pass the senses test. That is, you never hear about it anymore, you see fewer and fewer references to it around the web, and most importantly, few seem to touch it.

We’ve been debating for a couple of weeks now whether or not to remove the Buzz button from each story on our site. It seems to be little more than clutter at this point. A few stories do get a good number of buzzes, but as far as we can tell, the traffic coming back to us from Buzz is very, very minimal. Yes, we’re well aware that because of Gmail’s encryption layer, referrer information is being scrubbed, but we’re still on the look out for inferred traffic, and we’re not seeing much.

I’ve long since hidden my Buzz link in the “More” area of Gmail because the perpetual unread count was driving me insane. But I click on it at least once a day. And what do I see when I do? Not much. I follow just about 100 people. As far as I can tell, 90+ percent of all the content being put into my Buzz stream are Tweets that are being automatically pushed from Twitter. It really is FriendFeed all over again! Except minus all of the good conversation that would happen there.

Of the 25 most recent Buzz posts I see in my stream right now, exactly 3 have comments under them. Of those, one has 8 comments, one has 2, and one has just one. It’s a bit sad.

Okay, maybe I’m not following the right people. But talking to others who use the service more than I do and follow more people, the song is largely the same. Further, while I may only follow 100 people (which still seems like a lot), I am followed by over 2,000. And I manually share every single story I publish to Buzz (something most don’t do). The result? A few comments here and there, some of which I respond to. But again, mostly crickets.

We all know that Google is working on their next big idea in the social space. Buzz may or may not be a part of this supposed new “layer“. If it’s not, does Google pull the plug just about a year into it like they did with Wave? Back in August, Google CEO Eric Schmidt had some positive things to say about Buzz, but if you listen carefully, he seems to mainly credit the Gmail integration with any success it has had in gaining users. Based on this and other things I’ve heard, it doesn’t seem to me that Google is thrilled with Buzz. They’re just letting it play out for now. Sort of like Wave. 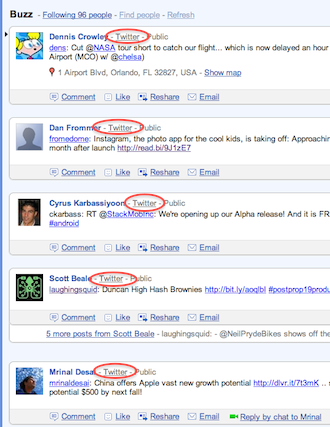 Quora has some nice conversations happening around the “Why did Buzz fail?” topic as well. While a few conclude that it’s still too early to call Buzz a failure, many of those answers are from April or May of last year. Six months later, it seems like even fewer people are talking about Buzz. And that includes developers — something which is not a good sign.

Former PayPal executive and Yammer founder David Sacks has the highest rated comment on the Quora thread. In his opinion, Buzz has failed for three main reasons:

All three make sense, and he gives more in depth reasons for each. But I’d also add a much more obvious reason: as a sharing tool, Buzz is rather hideous.

Thanks to where it’s housed, Buzz looks like Gmail. Gmail, which probably my most used and favorite overall web app, is far from pretty. It looks utilitarian. It looks like the opposite of a place that I would want to share pictures, for example. Both Twitter and Facebook look beautiful next to it.

Look at the latest social sharing app that’s seeing some early success, Instagram. They started with a social graph of zero, but they nailed the sharing dynamic, including the appropriate look and feel for a social app. And surprise, people are using it. Can you imagine if that were built-in to Gmail to start? There would be millions of happy users right now.

Of course Instagram has another key element: mobile. I’ve argued before that Google should have started Buzz as a mobile sharing application with location as a key element. And while their HTML5 app is pretty nice, it should have been a native app to start on all the big platforms. Can you imagine if Google had done that? If they launched Buzz as a social sharing native app extension for Gmail, I think we’d be talking about the service very differently today.

Can Buzz do what Wave couldn’t: survive? And burned by the Rasmussen departure, will Google give it more time than they normally would, or should?