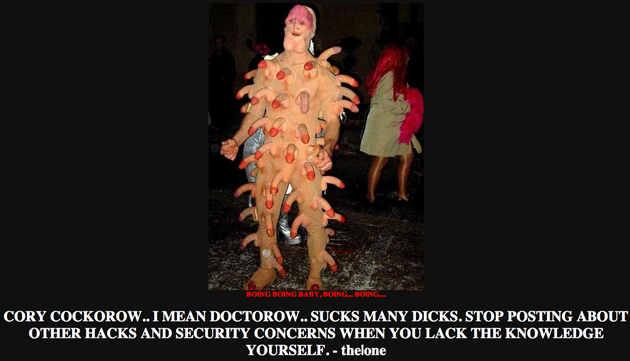 Something is definitely up at uber nerd site and “Directory of Wonderful Things” BoingBoing.net. A trip to the front page brings up the charming image above, which seems to be some sort of vulgar message from someone called “the|one” to site editor Cory Doctorow. The hack also ingeniously incorporates the “Jessi Slaughter ‘You Dun Goofed'” viral video.

Diehard fans have found a workaround URL for now. And the official BoingBoing Twitter account seems to have a sense of humor about it, tweeting stuff like “So much for the 100,000 Hours Without a Hack T-shirts,” “Someone’s gonna get a subpoenis… I mean a subpoena” and “Look, at least it’s not the new Gap logo.”

Update: The hack has been taken down and the site is back up. TechCrunch reader Machika Kuro informs us that this looks like a SQL injection attack.

Update 2: BoingBoing‘s Xeni Jardin tells TechCrunch that despite what Kuro claims, there was no “SQL injection” or other SQL vulnerability involved in the outage.