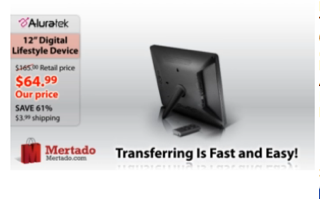 Mertado, a social shopping site that launched in April, wants to give social game developers a new way to make money: by incorporating a virtual storefront into their games. Today the startup is launching a new widget that developers on Facebook can integrate directly into their apps, and it’s also offering support for embedding the storefront on publisher sites across the web.

Mertado is a bit like a Groupon for retail goods — every day it presents you with a handful of items available at a discount price, with deals on things like digital picture frames, tote bags, and those As-Seen-On-TV gadgets that you’d never think of buying on your own but are actually pretty useful. The service has been available via a Facebook application and a Facebook Connect-enabled website (the company says its users are split around half and half between the two) and now it’s looking to increase distribution with the new widget.

Once a developer has integrated the widget, Mertado entices gamers to go shopping using a tried and true technique: by offering them ‘free’ virtual credits whenever they purchase something through Mertado. Mertado features support for Facebook Credits (it says it’s the first retailer on Facebook with Credits support), and it can also work with alternative virtual currencies. 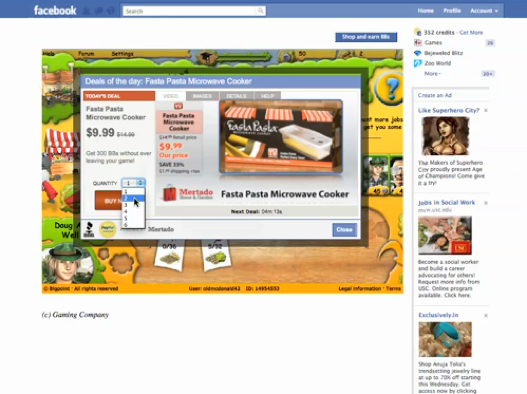 When a user activates the Mertado storefront, they’ll see a widget overlaid on top of the game they’re playing. The whole shopping process, from selecting an item to checking out with a credit card, is done from this widget, so the user never gets kicked off to another page (which is good news for developers, who want them to stay engaged with their game). To help get the gamer interested, there’s a very QVCish video describing the product Mertado is currently selling — in fact, the company actually hired someone with QVC experience to do the audio for these, which is a nice touch.

The embedded shopping widget will also work on publisher sites. Mertado isn’t the first to offer something like this (PayPal launched a shopping widget in 2007, and there have been a handful of similar startups). But Mertado says that it’s fairly unique because it isn’t simply promoting goods that are sold through another party — it manages the entire process, including fulfilling orders.

So will this be effective? I think the answer will largely revolve around how good the products Mertado promotes are, and how well it can target them. Offers of free credits may be enough to get users interested enough to activate the Mertado widget, and it could also push them over the edge if they’re considering buying the latest gadget Mertado is hawking. But if the consumer doesn’t have much interest in the product to begin with, I don’t think promises of Facebook Credits will be enough to get them to make a purchase.

Here’s a video walkthrough of how the widget works: