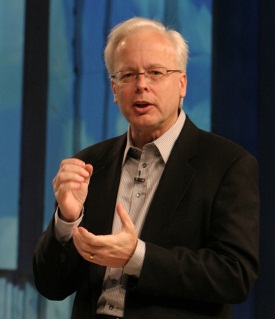 Ray Ozzie, who famously took over the reins as Chief Software Architect at Microsoft when Bill Gates formally retired from the company (his last full-time day was June 27, 2008), stepped down from that position last week and will leave the company behind within months.

Ozzie, of course, you should know as the historical driving force behind Lotus Notes, a popular e-mail and collaborative workspace software package. He also co-founded Groove Networks, which was acquired by Microsoft in 2005.

Five years ago this week, Ozzie penned a memorable memo, 5,000 words long, entitled “The Internet Services Disruption”, outlining the challenge for Microsoft to catch up to its rivals in the Internet and cloud computing space.

He’s celebrating that birthday with a fresh memo: “Dawn of a New Day”.

Below is a short excerpt from the end of the memo, as I wouldn’t dream of stealing the man’s thunder (read the whole, 3,477-word thing here):

Let there be no doubt that the big shifts occurring over the next five years ensure that this will absolutely be a time of great opportunity for those who put past technologies & successes into perspective, and envision all the transformational value that can be offered moving forward to individuals, businesses, governments and society.

It’s the dawn of a new day – the sun having now arisen on a world of continuous services and connected devices.