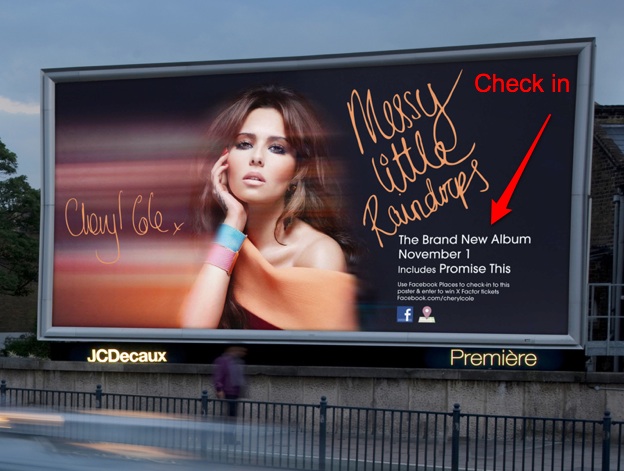 When Facebook launched Places in August, it encouraged advertisers to list their businesses in the Places directory. But now an advertiser is taking it one step further and asking passersby to check into a billboard using Facebook Places.

In a new outdoor campaign across the UK for British singer Cheryl Cole, who has a new album coming out and a concert tour, fans who check into the billboard will be taken to her Facebook page and get a chance to win two free tickets (plus travel and hotel) to one of her X Factor shows. The campaign was designed by Mediacom and Polydor Records.

I am not really sure a billboard counts as place, although I do suppose it is location-specific. But tying together check-ins with outdoor advertising like billboards and posters is something we will probably keep seeing. It is not the first time someone has this approach. A Nets billboard on the side of a building in New York City this summer, for instance, urged people to check in with Gowalla.

It is not clear how successful these billboard check-in campaigns will be, however. It just seems more natural to offer promotions tied to actual places of business. But as the check-in concept expands from checking into a place to checking into brands, it could become more of a simple call to action.