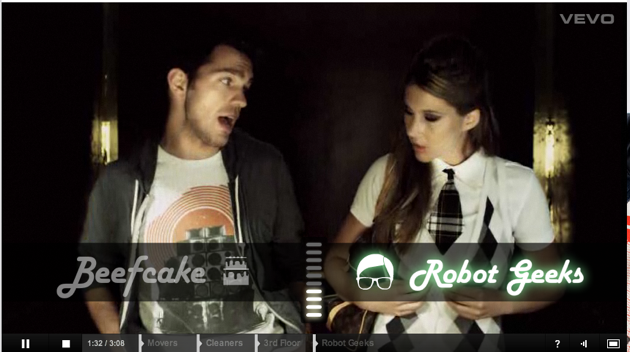 Head to leading music video portal VEVO this morning and you’re going to see something that’s quite out of the ordinary: a new music video starring Andy Grammer that puts you in the director’s chair. Hit ‘play’ and things will start simply enough, with Grammer walking down an alley as he croons toward the camera. But after a few moments you’ll see a popup asking if you want him to “Bump into Movers” or get “Dumped by Bikers”. Better make up your mind — you only have ten seconds to make your choice, and it actually impacts which version of the video you’ll be seeing. It’s part video game, part choose-your-own adventure story, and it’s what you might call “engaging as hell”.

The video may well be a taste of what’s to come over the next few years as musicians, entrepreneurs, the labels, and web publishers work together to figure out the future of music content online. And it’s surprisingly fun — there are dozens of possible versions based on the choices you make, with variations that include everything from dancing housekeepers to multiple cameos from actor Rainn Wilson (Dwight from The Office). But the story behind the video is also compelling. Over the last week I’ve spoken with some of the key players involved with the production to learn how it was put together, and where they see things going from here. 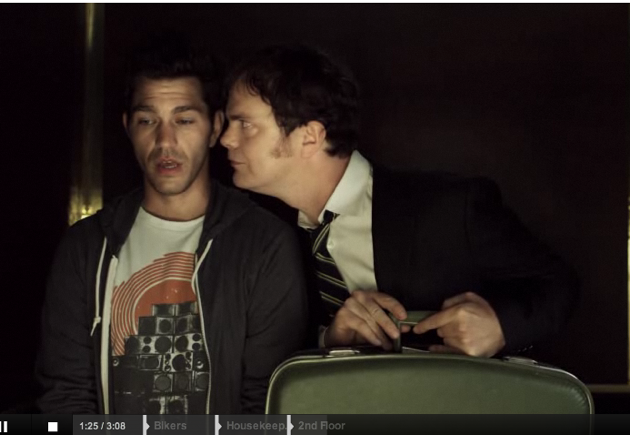 If the interactive portion of the video seems vaguely familiar, it’s because we previously wrote about the startup that’s building the technology behind it: Interlude. This Israeli company was founded by Yoni Bloch — who is actually a well-known musician himself — and has developed a platform that can add this engaging, interactive layer to video content. Interlude put together a demo video of Yoni early this year, and it was a huge success in Israel — he tells me that 25% of the country’s Internet-using population watched it. And perhaps even more impressive: the engagement stats showed that nearly everyone watched the video more than once, so they could discover the multiple routes.

Of course, interactive videos aren’t exactly a novel idea — we’ve seen plenty of startups looking to add an interactive layer on top of video footage, and it’s even possible to use YouTube’s annotations feature to build some basic interactivity. The key distinction that Interlude brings to the table is an interactive experience that’s seamless: the content doesn’t pause as it waits for you to make your decision. Instead, you see an overlay for a period of time determined by the artist (for the Grammer video it’s 5-10 seconds), and the audio and video never cuts out.

It’s one thing for a startup to build a snazzy custom video player — but how do you actually get artists to use it? That’s where S-Curve, a record label founded by former Columbia Records President Steve Greenberg, came in.

Greenberg (who is also known for discovering The Jonas Brothers and is a Grammy-winning producer) says that S-Curve is still a small company, which gives it the flexibility and a very strong incentive to keep innovating as much as possible. To do that, the label is working to discover and foster new technologies that are related to the music business — and then to actually use these technologies with S-Curve artists (and help connect the companies with the rest of the industry). Along with Interlude’s interactive video project, S-Curve has also been involved with Hashtag art, which was used by Katy Perry.

In return for helping these companies get off the ground in the hard-to-crack music industry, S-Curve will sometimes take an equity stake in the company, which is the case with Interlude. Greenberg expects that Interlude’s technology will extend well beyond music— he says there’s been interest from the advertising world, producers of online webisodes, and a content creators from a variety of other categories. In short, he says “the only limitation is the creativity of the people making the video — lightbulbs are going to go off when everyone sees it”.

The third piece of the puzzle is distribution — you need people to actually see what Interlude, S-Curve, and Andy Grammer have put together. Cue VEVO, the music video portal that’s a joint venture between Universal Music Group, Sony Music Entertainment, and Abu Dhabi Media (EMI participates as well, and all VEVO content is syndicated to YouTube in a setup that still confuses me).

VEVO would be featuring Grammer’s music content anyway (S-Curve is distributed by UMG) but this video in particular is going to be given very prominent placement. The reason? It’s the first video to be part of VEVO’s new Video Evolved showcase.

VEVO CEO Rio Caraeff says that the site wants to do everything it can to feature innovative music content — he says that “music videos are ripe for reinvention” and he wants VEVO to be a place to help these experiments come to life. So the site is setting up a separate section that will highlight these new technologies as they launch. In some cases, VEVO will simply be embedding content from other services onto the Video Evolved site. But in the case of Interlude, VEVO has actually integrated the startup’s video player into its platform, so it will be hosting the content itself.

VEVO is also doing something special to mark the launch of its first truly interactive music video: the site will be tracking which ‘routes’ made through the video are most popular and after two weeks this version will be considered the ‘official’ release — it will be the version that’s given to other content channels like television and YouTube.

There’s a clear theme running through all of this: the desire to discover the future of music videos and their interplay with the web, whatever that may be. And while it’s far too early to say whether this interactive music video technology will be as ubiquitous as the “static” music videos that came before it, I can say one thing with certainty: it’s pretty damn fun. Sure, it’s quite possible that the novelty will wear off after a few of these, but I found myself watching the video repeatedly just so I could find Dwight — the last time I was this engaged in a music video was Britney Spears’ Sometimes. I finally found Dwight, and it seems like the labels won too: I now have this Andy Grammer song stuck in my head.