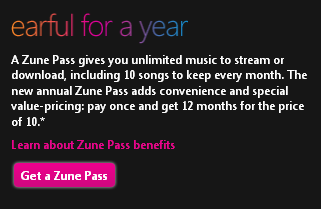 The Zune Pass is a tempting one for a lot of people, though to be sure the hardware and Zune player aren’t for everyone. But for those looking at subscription services for their music, it’s a pretty solid deal. This new annual pass makes it an even better one if you’re willing to shell out for a year ahead of time.

I know, it’s a bit daunting to pay for a year of anything these days, which I suspect will limit the effectiveness of this $150 annual pass offer. People don’t like to be locked into things, even if they locked themselves in and it’s a good deal. Could be good for bundling with Windows Phone 7 Phone Mobile Handset handsets, though.

It’s live now in the US, the UK, the Italy, and the Spain. Will it roll out to the other countries Zune recently expanded to? Probably, but who can say?

So for $150 you get 12 months of the service, which normally costs $15/mo., plus 10 “keepers” per month, which would have cost a buck each. So if you were planning on buying some music anyway, and you use the service properly (no guarantee there on either of those for most people), you’re really only spending about $30, for access to quite a large library of music. It really is a pretty good deal — if you’re willing to go the whole hog.