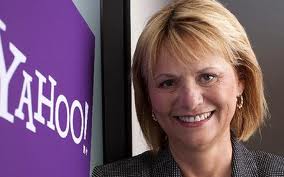 Yahoo CEO Carol Bartz was on Fox Business News today, and she was plenty Bartz-y. When Fox anchor Liz Clamen asked her repeatedly if she was on the way out, she said she was there to stay, adding “Do I look like a wimp?”

No. You do not. Even if you think Bartz is running the company into the ground, you have to give her credit for not holing up and hiding the way her predecessor Jerry Yang did, for continuing to be herself and holding her head high amid a pretty nasty storm of rumors. She further added that she wasn’t hiring a strong number two, saying she didn’t need one.

The question is, do we believe her? I don’t mean that question as a knock on her; frequently CEOs say they’re not going anywhere or not doing a deal or not launching a product just before they do. But Bartz didn’t help her credibility with her answer to Clamen’s question about whether she was tough to work for. She said: “So change just happens with new management and it’s actually refreshing for all of us.  So 15,000 employees, three people left?  That’s OK.”

Am I totally misunderstanding this or is she saying only three people have left Yahoo in the last year and a half? I think I’ve talked to three this week. I’m not convinced Bartz was a good fit for Yahoo, but I’ve long been a fan of her outspoken, here’s-the-way-it-is management style. And that statement isn’t how things are at Yahoo.

I’m somewhere between those onlookers who loathe Bartz and those who love her. I know a lot of talented executives who have left Yahoo in part because of her. They aren’t haters; they just don’t feel she gets the product or the business. And few metrics have been up during her short tenure, other than profitability which is up 80%, but that’s mostly through cost cutting and frankly, Yahoo had a lot of fat to cut. But on the other hand, I think Bartz is cleaning up a big mess that was a long time in the making. Not even a fictional wonder-CEO could do that in 18 months.

Let’s remember: The business hasn’t grown for six years and Bartz has only been there 18 months. She’s not the one who turned down Microsoft’s $31 a share offer. She’s not the one who bungled an acquisition of Google, YouTube or Facebook. And while we had some fun at her expense over her comments about the technical challenges of blogging– I can tell you from experience Yahoo’s in house content management system was impossible to use. Should it have taken this long and a pile of money to update it? Of course not. But it shows just how asleep the board and prior management was when it came to building a strong modern content creation company– not just a content aggregation company. Eight years after Google bought Blogger, and at least five years after most old media companies embraced blogging platforms like Moveable Type and WordPress, Yahoo is finally figuring it out. You can’t put that on Bartz.

I’ve said it before and I’ll say it again: The Yahoo CEO job has a way of making smart people look inept. Maybe she wasn’t the best pick, but who is this magical better person who’s out there just dying to take her spot?

Back to the Fox segment: There were two rumors Bartz didn’t deny. The first was when she was asked about the takeover rumors and she, as expected, said it wasn’t appropriate for her to speculate. The second was about Yahoo’s investment in Alibaba. She didn’t say they were selling the assets– even when needled by Clamen– but she didn’t say they weren’t  selling them, the way she categorically denied an upcoming ouster or talk of a strong number two joining her team. She definitely signaled that she views Alibaba as a wise financial investment and of little strategic value.

Given how much of global Internet traffic is increasingly coming from overseas, and how brilliantly Jack Ma has navigated infrastructure and political challenges endemic to a country like China, I just don’t see how Bartz doesn’t get how much Yahoo could learn from Alibaba or on a more basic level, the advantages of having someone like that as an ally. For sheer entertainment value, I’d give an arm to see Bartz, Jerry Yang and Jack Ma at a board meeting, when and if Yahoo get its contractually-obligated second seat on Alibaba’s board.

CLAMAN:  I need to ask you about Alibaba, this Chinese site in which you have a near 40 percent stake that is extraordinarily valuable.  Everyone is wondering are you going to cash in on that.  What are you going to do with Alibaba?

First of all, is it 7 billion in value?  Is it 11 billion?  I can’t get a straight number from anybody.

BARTZ:  Well, I think one of the reasons you can’t get a straight number is it’s a private company, so there’s a lot of people that are doing their best analysis of that.

You know, the company five years ago had some trouble in China and made such a wise decision to move the business out of China and not operate in China cause we see what can happen in some of the issues with that.

CLAMAN:  Meaning Google and that situation.

BARTZ:  And we partnered up with a fantastic entrepreneur named Jack Ma. Five years later, everybody is salivating because it was such a good decision and such a good investment.

So we continue to watch this investment.  We’re on the board of Alibaba.  And we’re also always watching what is best for the shareholders.

CLAMAN:  Would you wait until it goes public or do you not want to miss an opportunity that may be before that?

BARTZ:  You’re always evaluating things like this, Liz.  Any investment you’re evaluating should I take some out now, should I wait and do these things later.

We have a team of very strong financial experts that both work here and advise us, and we will do the right thing for the shareholders, no doubt about it.

CLAMAN:  It must be tempting, though, when you look at — OK, let’s use the low number — $7 billion, if that’s what Alibaba is valued at, to say, boy, you know, this would get some of the analyst heat off my back.

BARTZ:  You know, I have a job that absorbs the heat.  That is my job.  And so, hey, listen, sometimes it is not fun  that you get a little more heat than you expect.  But we have such confidence in what we’re doing and we have such confidence in that investment that we will not do anything silly because of supposed heat.  We will do the right thing as a management team and the right thing for the shareholders.