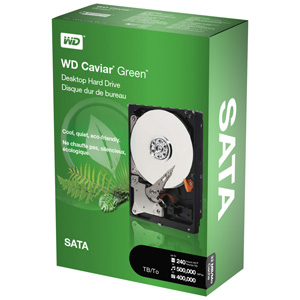 Western Digital outed a 3TB external hard drive under the My Book line just a few weeks ago, but now, the same 5400 RPM hard drive along with a slightly smaller 2.5TB version are available sans the enclosure. Both drives ship with an PCI-E Advanced Host Controller Interface Host Bus Adapter that will add operating system support for the large drives. Even with this card, the drive will not talk with Windows XP either as a boot or secondary drive and won’t boot the 32-bit versions of Windows Vista or 7.

This goes back to the days of DOS when the LBA (logcial block addressing) standard was developed and is the main reason why Seagate, despite releasing its 3TB external drive way back in June, hasn’t released the hard drive itself on the market just yet. It’s a fustercluck of compatibility, but apparently Western Digital feels the world is ready for these drives. Fine with us. We can read a compatibility chart.

These drives aren’t all that expensive with the 3TB shipping for $239 and $189 for the 2.5TB version. Although unless you’re low on hard drive trays and must have the absolute most storage possible, 2TB hard drives are still a little better deal right now with a few options available around $100.