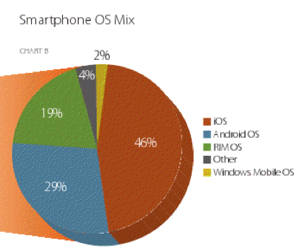 Mobile ad network Millennial Media, whose ads reach 63 million of a total of 77 million mobile web users in the U.S., or 81% of the U.S. mobile web; is releasing its monthly mobile mix today. In September, Android was again the second largest Smartphone OS on the network since July 2010, increasing 2% month-over-month to a 29% share of impressions. Apple’s iOS took the top spot, with 49% of impressions on Millennial’s network, up 1% since August.

Millennial added a new data point this month: revenue. This month for the first time, Android revenue on the network exceeded iPhone-only revenue on the Millennial network. But iPad revenue growth increased 316% in Q3, with impression growth up by 156% in the same period. 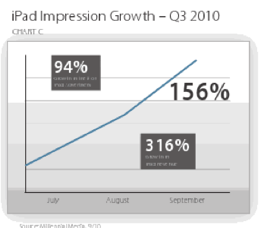 The top 4 connected devices in Q3 were the iPod Touch, iPad, Sony PSP and the Playstation 3. Feature Phones experienced the largest decrease of 4% month-over-month and had a 29% impression share on Millennial’s network.

With respect to device manufacturers, Apple accounted for 30% share of impressions on the Millennial network in September. Motorola continued its fast growth pattern, jumping ahead of Samsung to become the second largest device manufacturer. RIM and HTC rounded out the mix, taking the fourth and fifth spots, respectively. RIM devices represented five of the Top 20 Mobile Phones, with the BlackBerry Curve maintaining the third position for the second consecutive month. Smartphones accounted for 14 of the Top 20 Mobile phones on Millennial.

In terms of specific applications, Games, Social Networking and Music were the Top Three Mobile
Application Categories in Q3.

The most interesting data point out of Millennial’s report is the revenue tallies for Q3. Although iPad ad requests and impressions are growing, Android phones seem to be bringing in more money, at least on Millennial’s network. I’d be curious to see if this trend is reflected on AdMob and other mobile ad networks, or if this is exclusive to Millennial.

Millennial itself is now planning to IPO next year, CEO Paul Paulieri told us last month. As competition heats up in the mobile advertising space, with iAd and Google’s AdMob all vying for a pice of a $1 billion market, it should be interesting to see how things play out in the space.