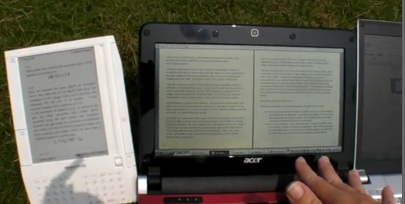 With nary a peep on the possibility of Apple baking a seeable-in-sunlight transflective display into the rumored 11.6” MacBook Air that’s expected to come floating up from the Pulpit of Jobs at Apple’s “Back to the Mac” tomorrow, I’d like to make a pretty safe prediction (read: offer unasked-for advice): An Apple-anything with such a display would make mobile-warriors’ and tree-huggers’ hearts flutter, and competitors’ hearts shudder.

Seeing the light on this one’s a no-brainer: Outfit the rumored MacBook Air—as well as all MacBooks, but especially iPads and iPhones and iPod touch models—with sunlight-friendly displays. Suddenly, Apple’s the night-and-day winner when it comes to choosing and comfortably using your mobile devices in naturally-lit settings like outdoors on a picnic table or indoors in a brightly-lit room, while saving that not-always-handy resource known as power (the greatest percentage of which gets gobbled up lighting the screens of the above-mentioned products).

Sure, we witnessed this type of sunnyside-up screen on the Toshiba Portégé R600 which, in my book Green Gadgets For Dummies, I applauded for having earned the coveted title of Greenest Notebook in the 2008 Greenpeace Green Electronics Survey. From its eco-friendlier elimination of hazardous substances, to its smallest-possible recycled packaging, lightweight (2.4 lb) design, stay-put solid-state (SSD) drive option (not to mention a built-in DVD burner!), and that oh-so-readable-in-broad-daylight screen that helped the little wonder’s charge last throughout the entire workday, what wasn’t to love? Oh right, the price, which weighed in at around $2000. Hindsight being 20/20, the R600’s display that looked so darn eye-opening in 2008 has since been overshadowed by brighter, sharper, faster transflective displays like those being developed by Pixel Qi, the manufacturer behind the doubletake-worthy screen found in the Innoversal Lattice Tablet, for instance.

While Apple generally doesn’t like to take big risks with early-bird technologies, introducing such displays in the MacBook AIr first would be a great way to test the market’s appetite for them. Even though employing costlier eco-friendlier transflective displays means forking more green from potential buyers’ wallet—adding perhaps $100 to $200 to the price of each device—the higher retail price wouldn’t dim sales in the least. Apple could start with the MacBook AIr, which is already its priciest notebook where it likes to introduce the most cutting-edge technologies such as all-flash memory. People who buy MacBook Airs are not price sensitive. Like Prius owners, potential buyers would pay more for that look-at-me-I’m-making-a-difference feeling of helping the planet by using less energy. (Or less magnanimously but more realistically put, to gain the power of using less power to achieve greater, all-day mobile-computing mileage between stops to the wall outlet). And let’s not ignore Steve Jobs’ uncanny talent for convincing audiences they’re getting more bang for their product buck with Apple than from less-pricy competing products which, on a purely spec-for-spec showdown, almost always offer a better value.

The difference this time—assuming we ever actually come face-to-face with Apple products outfitted with such transflective screens—would be that less actually is more: a little more expensive up front, but a lot less costly to the environment and your wallet over the longer-lasting gadget lifecycle haul.

Joe Hutsko is a technology writer and author, most recently of Green Gadgets For Dummies. His website is JOEyGADGET.com, and he can be followed on Twitter @joehutsko.