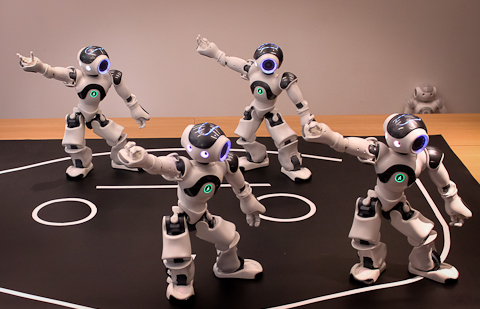 A French company exporting robots (of all things) to Japan? Paris-based Aldebaran has just inked a deal with the University of Tokyo, which will use a total of 30 NAO humanoid robots to teach computer science later this year. Depending on the robot model and specs, each robot is priced at between $1,400 and $17,000.

Aldebaran says their little guy is the world’s most used robot for academic purposes. At the University of Tokyo, NAO will be used for the „About Beauty of Posture and Motion Programmed in Humanoid Robots‟ seminar that’s scheduled to start this winter.

The picture above shows four NAO robots posing during a press conference in Tokyo earlier this week (click here for an extensive picture gallery).

Here is a (pretty impressive) video showing a group of NAOs dancing in sync:

In this video, 4 NAOs can be seen performing a number of different moves for the press: