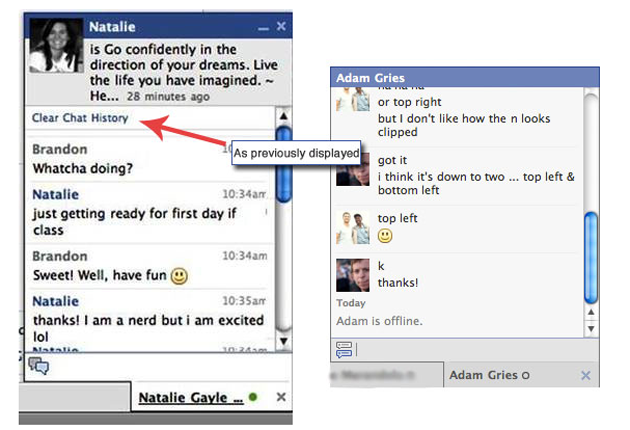 One somewhat overlooked side effect of last week’s Facebook Groups launch was the inexplicable disappearance of the “Clear Chat History” button from Facebook Chat, which is currently undergoing some hardcore product changes due to the Groups introduction. A vocal minority of Facebook users protested the change as violating user privacy by not allowing chat users to immediately remove their data among other things.

A source familiar with Facebook hypothesized that the button’s removal was due to load issues caused by the new reliance on Group chats, as chat data greater that 14 days would have to make a database hit, overloading the server if scaled to apply to large Groups and causing performance issues. Despite these practical concerns, Facebook responded to the user outrage today by confirming that they would return the button, with the following statement:

“We’ve been making a number of changes to optimize and simplify Facebook Chat over the past weeks. As part of the effort to improve Chat, we’ve been testing an interface without the ‘clear chat history’ link prominently displayed, since only a small number of people use it.

Based on the tests, we’ve decided to keep the ‘clear chat history’ link and to optimize it’s placement within the Chat interface. Given its low usage, we are placing it at the top of the Chat scroll ― where it is still easily accessible without cluttering UI space throughout the course of the chat. We believe this solution strikes a good balance between the many different interests of the millions of people on Facebook Chat.”

According to Facebook, a small number of users utilized the “Clear Chat History” button which is why it was considered for removal in the first place. While I have still yet to receive any notification on whether the most recent “Clear Chat History” iteration auto-deleted history instead of manually deleted, what I can glean based on the statement is that the button will be returning to the top of the “chat scroll,” which if I’m  not mistaken, is where it was originally.

In any case, based on these first signs of Q&A processes and the fact that a whole new team has over taken “Facebook Chat,” we can most likely can expect a complete chat overhaul soon.