Currently the textPlus app allows you to send text messages for free to any number using the in-app advertising. In this next iteration the service will be available separate from an app and not just piggy backing but directly integrated into a product.

Metro PCS is a European style pre-paid carrier and the above textPlus arrangement is specific to $45 and $65 service plans. Participating users can send the message “!chat” to the 60611 short code, enter in their contacts and let the free texting begin.

Launched in June 2009 as an alternative to costly carrier provided messaging, textPlus now boasts over 9 million downloads, in a network that reaches 24 million people and over 3.5 billion messages sent.

Funded by Kleiner Perkins Caulfield & Byers to the tune of $13.3 million, GOGII is currently available on the iPad, iPhone, iPod touch and Android phone. When asked what its future plans for carrier partnerships beyond Metro PCS are, textPlus’ Director of Community Drew Olanoff could not give me any specifics responding.

“Our goal has always been to have a relationship with the carriers.  We find that working along with them results in happier customers. Unlike some of the folks doing similar things, we prefer to go through the front door.” 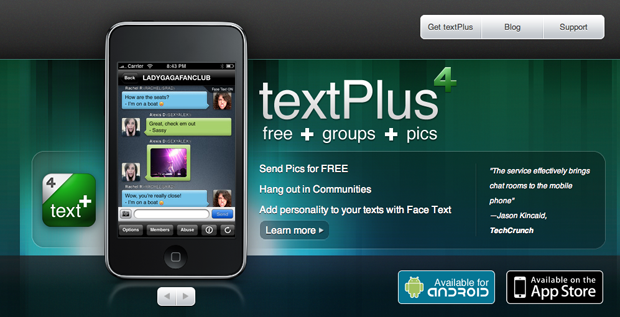