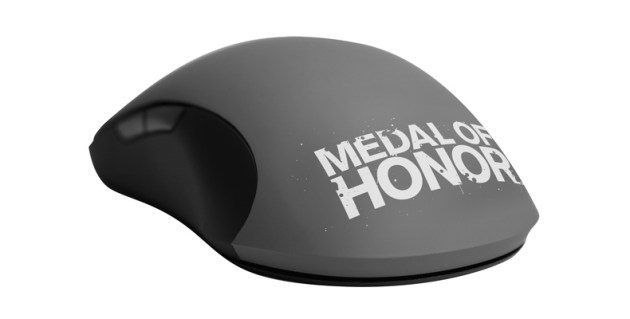 Taking advantage of the hype (if not the acclaim) of EA’s Medal of Honor, SteelSeries has updated some of its accessories to join in on the fun. The company’s Xai mouse, the 6Gv2 and Shift keyboards, the QcK mousepad (“surface” in PC gaming lingo), and 5Hv2 and Spectrum 5xb headsets can all be had with official Medal of Honor branding.

You’ve got the Xai mouse ($89.99), which I actually just bought (the non-MoH edition, that is—FedEx says it will arrive on Friday) to replace a Logitech mouse that decided it would be cool to die after less than a year of use. Cool! It’s pretty highly rated online (otherwise I wouldn’t have bought it, you see), and now it’s decked out in MoH colors. 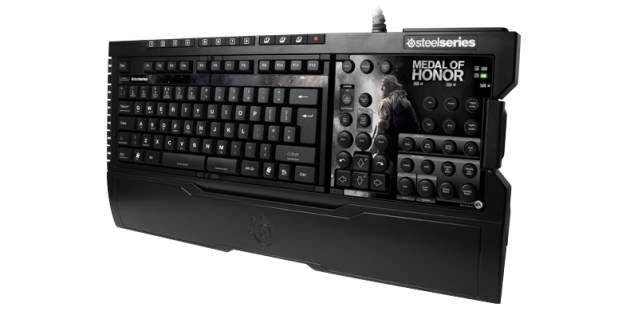 You’ve got two keyboards to choose from. Well, one keyboard, the mechanical 6Gv2 ($99.99) (trust me, you want a mechanical keyboard if for no other reason than the satisfying clanking sound they produce) and a MoH surfaced ($99.99, above) version of the just released Shift. Or you can just grab the surface separately ($24.99).

Then there’s the QcK mousepad ($14.99), which is also highly regarded online.

Lastly are the two headsets:the 5Hv2 for you PC gamers and the Spectrum 5xb, which I reviewed in conjunction with Halo a few weeks back, for the Xbox 360 crowd. (These headsets won’t be available till the first quarter of 2011.)

Granted, I wouldn’t go out of my way to buy, say, a keyboard simply because it has a logo slapped on it, but the fact is these are quality components with a bit of dash added for fans. No harm there, I don’t think.