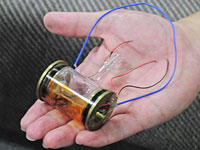 Japanese business daily The Nikkei is reporting that at team of researchers at Kyoto University developed a palm-size X-ray generation device with a special power source: two D-type batteries. According to the paper, the current prototype is just 5cm long and 3cm wide.

The way it works is that there are two electrodes (made of tantalic-acid-lithium) placed inside a glass case. These electrodes start producing heat when they are subject to a current, releasing electrons from within the device. If the electrons hit the item to be examined, radiation is emitted.

The research team claims it could specify the elements of a grain of salt placed in the device within 3 minutes. It sees the device as an alternative to conventional X-ray generating machines and says it can be used in combination with a portable X-ray detector.

Apologies for the small picture – it’s the only one available at this point.